I am using the playing card shuffler, and today I got: ♥Jack♥. For my deck of ♥Hearts♥, I assigned the short-story collection Daughters of Decadence: Women Writers of the Fin de Siècle (1993), a Virago Modern Classic edited by Elaine Showalter. Today’s short-story is

Our protagonist is a woman who drinks alcohol, goes fishing alone, smokes cigarettes, lacks maternal feelings, and tends to take the sexual initiative in her relationships. The men in her life call her gypsy, and she is frequently compared to wild animals, and referred to as a devil, a witch, and a sphynx. She is always on the verge of crossing a blurred line: our unnamed protagonist is not viewed by the male characters (and perhaps, by the reader) as womanly enough. 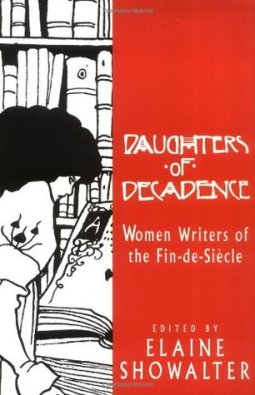 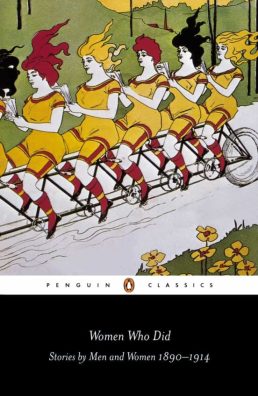 The story opens with the voice of a man, coming towards our protagonist, while she is fishing alone in the wilderness. They meet at a trout stream, and he is impressed by her skills in fly-fishing. They don’t know each other. A conversation ensues. “I hope I am not trespassing?”, asks the man. (He is)

The perspective slides from the man to the woman and back, so that we can follow three dialogues happening at the same time: the one they are outwardly making (“Trout run big here?”); the lines going on inside the man’s head, as he examines this woman more or less as his next prey (“what odd eyes the woman has, kind of magnetic”); and the woman’s imperceptible reactions to him (“There is a tone in his voice as he says this that jars on her, sensitive as she is to every inflection of a voice, with an intuition that is almost second sight.”). The woman abruptly leaves him by the stream and goes back home.

Time passes. Cut to the woman’s garden. A man greets her. He may or may not be her husband (He is). He is fond of his hen’s chicks (She is not). A harmless dialogue ensues. They are talking about nothing in particular. And they seem to have had this conversation before.

Time passes again. Cut to a scene in their drawing-room. Our protagonist is bored, her husband asks her about the book she just finished. “It would be a greater book if he were not an Englishman. He’s afraid of shocking the big middle-class.” (Ouch) She smokes and watches her husband (“imagining him in the hats of different periods.”). She springs out of the chair, seizes his book and pipe, and perches herself on top pf him. Foreplay ensues (The Victorian way).

“You are a queer little devil!”, her husband says, impatiently. He is still staring at his pipe and his book, now laid safely on the table. (She is biting his ear) “Perhaps I was a man last time, and some hereditary memories are cropping up in this incarnation”, she teases him, biting his chin. He carries her off to their room.

Time passes. Cut to a meadow. Our protagonist is stretched out on the ground, looking at the clouds. She thinks of Cleopatra, sailing off to meet her Anthony, “and a great longing fills her soul to sail off somewhere too – away from the daily need of dinner-getting and the recurring Monday with its washing, life with its tame duties and virtuous monotony.”

She fancies herself on the back of a horse, running in the desert, and feels the swing under her, as well as a flash of eyes all around, “and her thoughts shape themselves into a wild song, – (…) a song to the untamed spirit that dwells in her”. Then, she imagines she is on a stage, out in the open air, and hundreds of eyes are watching her, as she dances, dressed in diamonds and jewelled snakes: “She bounds forward and dances, bends her lissom waist, and curves her slender arms, and gives to the soul of each man what he craves, be it good or evil. (…) She can see herself with parted lips and panting, rounded breasts, and a dancing devil in each glowing eye, sway voluptuously to the wild music that rises, now slow, now fast, now deliriously wild, seductive, intoxicating with a human note of passion in its strain”. She dances faster and faster, until “the very serpents seem alive with jewelled scintillations.”

As the men in her imagination cheer at her performance, her thoughts fall on other women, women she has known, “women good and bad, school friends, casual acquaintances, women workers, – joyless machines for grinding daily corn, unwilling maids grown old in the endeavor to get settled, patient wives who bear little ones to indifferent husbands until they wear out, – a long array. She busies herself with questioning. Have they, too, this thirst for excitement, for change, this restless craving for sun and love and motion?”

And she laughs at man’s inability to “find out the key to our seeming contradictions”: “They have all overlooked the eternal wildness, the untamed primitive savage temperament that lurks in the mildest, best woman. Deep in through ages of convention this primeval trait burns, an untameable quantity that may be concealed but is never eradicated by culture—the keynote of woman’s witchcraft and woman’s strength. But it is there, sure enough, and each woman is conscious of it in her truth-telling hours of quiet self-scrutiny – and each woman in God’s wide world will deny it, and each woman will help another to conceal it – for the woman who tells the truth and is not a liar about these things is untrue to her sex and abhorrent to man, for he has fashioned a model on imaginary lines, and he has said, “so I would have you,” and every woman is an unconscious liar, for so man loves her. And when a Strindberg or a Nietzsche arises and peers into the recesses of her nature and dissects her ruthlessly, the men shriek out louder than the women, because the truth is at all times unpalatable, and the gods they have set up are dear to them”.

Cut from her inner musings to the scene outside. She is still stretched on the meadow, and there is a man at her side (the same man she had met at the stream). He interrupts her daydreams by asking what was on her mind. Perhaps, they have just met by chance once again; perhaps, he is a creepy guy, following her around; perhaps, they are having an affair for some time now; perhaps, they have just had sex; perhaps, while dreaming of riding horses and dancing and whatnot, she was dozing after sex; or perhaps, she was innocently indulging in a sexual fantasy; and, perhaps, her lover is just a figment of her imagination, and she is inventing and playing to herself their whole conversation. We don’t know. Does our protagonist know? 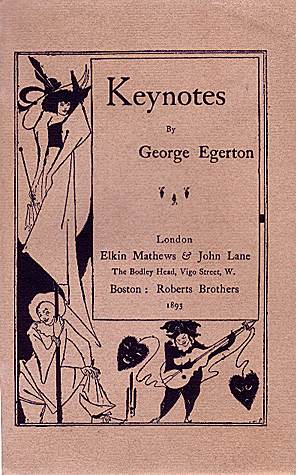 “You have given me something—something to carry away with me—an infernal want. You ought to be satisfied. I am infernally miserable”, the guy says to her (She seems to have heard that one before). “I never met any one like you, you are a strange woman!” (Yep, she definitely heard that one before.) He asks her to give him a sign in two days, perhaps hang something on the lilac bush, if she decides to terminate their affair and leave him. She stands up and glides away through the grass.

Time passes. Cut to our protagonist’s bedroom. She is at her window, once again watching the clouds sail through the sky. Her husband is outside, talking to her through the window. Meanwhile, she is thinking of the stranger (her lover?) she had met by the stream. She is not feeling well. She thinks of death, she thinks of life, and an idea springs to her mind. She buries her face in her hands. Is our protagonist pregnant? Is she hiding her tears? Are these tears of happiness, or of sadness? And whose child is this?

Her maid enters the room. Our protagonist asks her whether she has ever had a child (She has. The child died). They exchange confidences. Our protagonist then rummages through her garments, selects a piece, and asks the maid to hang it on the lilac bush. Then, she changes her mind: “I will do it myself.”

She may have given up hope of ever escaping her life or of being understood; or she may have found understanding elsewhere, in a moment of true connection with her maid – Lizzie, the only character who is named in the story -, over a shared experienced of motherhood. We don’t know, we are not supposed to know. Has our protagonist decided to leave her lover? Or is she going to meet him? Is she escaping from a cage, or locking herself inside one? Either way, she does it by her own choice. “I will do it myself.”

The highlight of the story for me was in what it refused to disclose: everything is merely hinted at; our protagonist is often being misunderstood or dismissed by the men in her life (and, perhaps, by the reader); and we are frequently drifting along in her stream of consciousness. The sexual tension between the characters and the extramarital affair are in the eye of the beholder.

The fact that the protagonist has no name is yet another blur in the lines: she is no Victorian ideal woman, she is this woman; she is Cleopatra, she is Eve, she is Salome, she is Hedda Gabler; she is everywoman, this woman, no woman in particular. She is a performer.

The title is also interesting: a trotline set across a stream, hinting at the ideas of fishing and being fished; an interrupted line, something one is unable to reach; the act of speaking in crossed purposes; a line of argumentation; a disruptive force; to cross the line; to be cross with someone; an intersection; to bridge, tramp over, go across; a trespass; a crossing of different breeds, or the point where they meet; the act of crossing through, and arriving somewhere new.

We don’t know for sure whether the cross line was ever breached; yet, we cannot help but feel that our protagonist was trespassing in some way, or that the story in itself was transgressing some unspoken rule of what should and should not be written in Victorian fiction.