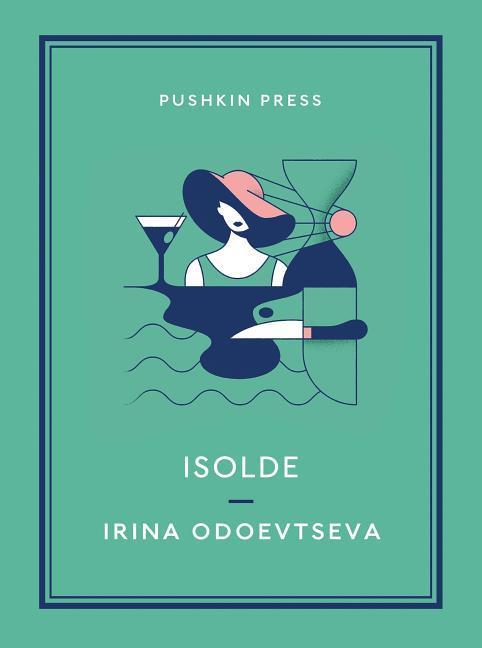 When Isolde (2019, tr. Bryan Karetnyk and Irina Steinberg. Original: Изольда, 1929) opens, it’s summer, sometime in the wild 1920’s, and we are in Biarritz. A wealthy British boy named Cromwell falls in love with a girl on the beach and decides to name her Isolde, after the book he is reading. Isolde is actually Liza, a 14-year-old Russian émigrée, on holidays with her family. As the narrative perspective subtly shifts, we soon learn that she is our girl: we will follow her through the following months, as she comes of age (or falls from grace) in less-than-ideal circumstances.

After the death of her father in the Russian Revolution, Liza, her teenage brother Kolya, and her mother Natasha have emigrated to France. The family has fallen on hard times, and Natasha sustains their lavish lifestyle through a string of lovers. One of them is Bunny, a married man who, unbeknownst to Natasha, is on the brink of bankruptcy, and steals his wife’s jewellery to finance his lover, for whom he nurtures a nightmarish obsession. Deep down, Bunny knows that Natasha will have no use for him once she discovers his money is gone. Worse still, she is head over heels for an abusive younger man, Boris, who is only interested – guess what – in her money (and, potentially, in her charming daughter). All are lying, all are short of money, and all are milking each other in some way.

To make matters more complicated, Natasha is pretending to be Liza and Kolya’s cousin, and insists that they never call her as ‘Mama’. When Boris starts to hit on Liza, Natasha feels threated by the girl’s youth, and decides to take off with him to Nice, harbouring the vague hope that Bunny would help the children if they fall into dire straits.

Needless to say, Liza and Kolya are left to their own devices. Joined by Liza’s boyfriend, Andrei (the sad boy, the real Tristan of the story), they are more than delighted to sponge off poor Cromwell for their extravagant evenings dining out at restaurants, drinking champagne, and dancing to jazz music.

I like how the book starts as a seemingly light satire of the upper-class expats’ degradation and dissolute life-style, only to gradually unravel into a nightmarish intrigue – as an addiction tale that ends up by consuming each of the characters in their own way. We have a strong sense that Liza and her troupe are part of a lost generation, banned from the past and barred from a sense of future, and forever balancing themselves between wild pleasures and despair.

As Liza’s fall from grace unravels, the narrative of her daily life becomes more and more intertwined with dream scenes, as if she had let go completely and were sleepwalking through life. The landscape descriptions are rendered from inside out, merging with the character’s feelings: “Liza went through to her room and sat down on the light blue divan. Outside, wet auburn leaves spun silently down – like wet dead butterflies. The trees’ thin, dark branches quivered pitifully. Rain hit the windows at an angle and ran down the panes in thin streams. The wet, shiny glass made this familiar scene appear strange – cruel and hopeless.”

The highlight of the book for me is the way it slowly builds a deep sense of alienation, as Liza begins to feel increasingly suspended (or trapped) in a limbo between dreams and reality; childhood and adulthood; home and homelessness; her new life in France and her memories of (or fantasies about) Russia. She longs to be able to call Natasha her “Mama” again, and this longing to be mothered is somehow intertwined with a dream of returning to Russia, a ‘motherland’ that may only be a product of Liza’s imagination.

Liza will be entangled in a perverse plot to get money; she will lose her sense of reality; and her life will be peppered with some Kafkian spice. Eventually, she will sleepwalk into a trap assembled by Cromwell’s older cousin, in an extended scene that feels very reminiscent of what Vladimir Nabokov would later develop in Lolita (1955).

The narrative will become a beating hub of wasted youth, teenage angst, sexual perversity, and nihilism, spiced up at one point with some sapphic flavour, and crowned throughout by an underlying sense of sorrow and longing. Liza’s heart will be plucked from her breast, offered vainly as a gift, and finally eaten alive.

“She reaches out a hand and plucks an apple from the fruit bowl.
She no longer has a heart in her breast. It’s empty and silent there. Her heart is this red apple. This is it — her heart. It’s sitting in the palm of her hand. It’s exposed, it’s beating, it flutters and it loves. It feels everything. She squeezes it with her fingers, and her heart feels pain. What should she do with it? What should she do with her heart?
She holds the apple out to Andrei.
“Eat this Andrei, it’s a gift from me to you.”
Andrei takes the apple indifferently, rubs it on his sleeve and then digs his strong white teeth into it, taking a big bite.
“This pain is going to be horrible,” Liza thinks. “He’s eating my heart.” She clenches her fists to stifle a cry of pain. But it doesn’t hurt at all. She looks at Andrei in surprise and watches his white teeth chomp on the apple. And it doesn’t hurt at all. “It’s not my heart. I’m just drunk. Drop it. Don’t eat it, Andrei.”
Andrei throws the apple core on the floor.” – Irina Odoevtseva, Isolde