Woolson was born in Claremont, New Hampshire. Shortly after her birth, three of her sisters died of scarlet fever and the family moved to Cleveland, Ohio. There, Constance attended Miss Hayden’s school and the progressive Cleveland Female Seminary for wealthy young women. Later, she went to Madame Chegary’s School, a French finishing school in New York, and graduated in 1858.

During the Civil War, Woolson worked for the Union cause, and is said to have refused an engagement to a young man, so as to continue to tend to her parents. Her father died in 1869, and, to help support the family, in the following year, she started to publish short stories and essays in major magazines, such as Harper’s, Scribner’s, and The Atlantic Monthly.

She was nearly 30, and her stories met with immediate success (Woolson was a grandniece of James Fenimore Cooper, and her brother-in-law had connections to major New York publishers). In 1873, she published a children’s book, The Old Stone House (1873), and, in 1975, her first collection of short stories, Castle Nowhere: Lake-Country Sketches (1875).

Her mother died in 1879, and Woolson moved to Europe, travelling extensively throughout England, France, Italy, Greece, Switzerland and Germany. In 1880, she published her first novel, Anne (1880).

In that same year, while staying in Florence, she met Henry James, and the two would grow to develop a close friendship for the next 14 years. When they first met, he was writing The Portrait of a Lady (1881), and Woolson would write to him later about its protagonist, Isabel Archer: “With no character of yours have I ever felt myself so much in sympathy.” James made Woolson the model for The Altar of the Dead (1895), The Beast in the Jungle (1903) and The Jolly Corner (1908).

Throughout her life, Woolson suffered from bouts of depression and a congenital deafness, which worsened with age. In 1890, she wrote to Henry Mills Alden about her struggles with depression: “Did you ever see a small insect, trying to climb a wall, and always, sooner or later, falling to the floor – only to begin again? That is I.”

She never married, and the idea that she might have suffered from unrequited love for James lacks any evidence. Woolson’s fiction, however, explores intimate relationships between women, and is frequently marked by a sapphic undertone – such as in the short stories Felipa (1880) and Miss Grief (1880), and in the novels Jupiter Lights (1886) and Horace Chase (1894). Woolson was also a close friend of a famous Bostonian couple, Alice James and Katherine Loring.

In 1894, she was suffering from yet another bout of depression and from influenza, and was undergoing a treatment with laudanum. On January 24th, 1894, Woolson fell to her death from a fourth story window in the apartment in Venice: she may have intentionally jumped, or may have been delirious under the influence of the drugs she was using. No one knows. In 1891, she had written to William Wilberforce Baldwin: “Life is not worth living at all, without courage. I am quite determined never to outlive my own.” Woolson survived for about an hour after her fall. She was 53 years old.

Woolson wrote short stories, essays, poetry, travelogues, and novels, and was one of the most popular 19th century American writers, but is still most remembered as a footnote to Henry James. 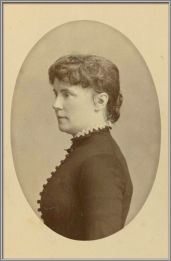