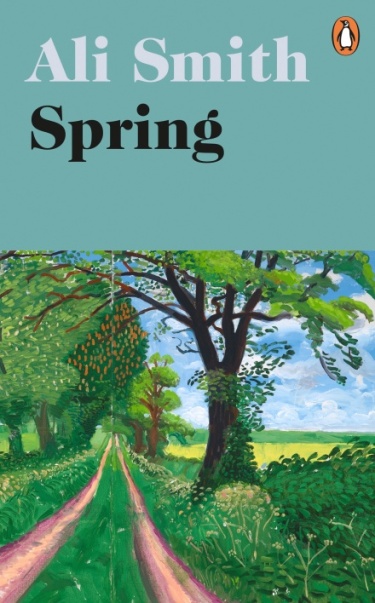 Spring (2019) begins with chorus of angry voices, a collage of social media rants and headlines, disrupted in the end by a voice that seems to come from nature – like spring itself, or truth, two splitting forces. “What’s sending the thinnest of green shoots through that rock so the rock starts to split?”

We follow Richard Lease, a filmmaker far beyond his heyday. He is mourning the death of his long-time collaborator, a brilliant screenwriter named Patricia Heal (Paddy). They started working together back in the early 1970’s, when they made a ground-breaking TV drama, Andy Hoffnung (a pun on Beethoven’s An die Hoffnung – To Hope), about the Holocaust.

When the story opens, 40 years later, Richard is out of work and having to make ends meet by half-heartedly taking part in a film project about Rainer Maria Rilke and Katherine Mansfield. Both writers lived in the same small Swiss town in 1922, but never met while there. However, in the ridiculous script on which Richard is forced to work, Rilke and Mansfield have wild sex on a cable car. “There’s no story,” Richard tells himself while considering suicide, “He’s had it with story. He is removing himself from story.”

Paddy has recently died of cancer, and he is continuously flashing back to the time when she was still alive. He is also constantly having imaginary conversations with his daughter, with whom he lost contact in the late 1980’s, after his divorce. And she may or may not be a ghost, or the voice of his conscience (which perhaps amounts to pretty much the same).

Richard’s story will collide with that of Brittany Hall (Brit), an intelligent 20-something woman who, unable to afford college, takes a job as a guard at an immigrant-detention centre where detainees are held in brutal conditions. The centre is managed by a faceless private firm, and a collection of abbreviations help to numb Brit from the violence of what her job amounts to. The dehumanization of guards and detainees goes hand in hand.

Brittany and Richard are two lost souls whose stories are threaded together by the arrival of a mysterious 12-year-old girl, Florence, who will convinces Brit to accompany her to Scotland (and will lure Richard back to life). Florence, like Lux in Winter (2017) and Daniel in Autumn (2016), is the outsider who comes to bring both disruption and illumination. “The girl is like someone or something out of a legend or story, the kind of story that on the one hand isn’t really about life but on the other is the only way you ever really understand anything at all.”

And Florence is Spring’s nod to Shakespeare. While Autumn (2016) had referenced The Tempest (1611) and Winter (2017) Cymbeline (1611), Spring (2019) borrows much of its magic from Pericles, Prince of Tyre (1619): when Paddy asks, “who do you think you are, bloody Pericles of Tyre”, Richard answers “Pericles of Tired”; and Florence is your take on Marina in Shakespeare’s Pericles, a character with a magical ability to make others be their better selves and do the right thing. At one point, Florence says, “Sometimes I am invisible”. Maybe this is her magical power, maybe it is a kind of social invisibility: “Certain white people in particular can look right through young people and also black and mixed-race people like we aren’t here.” The motto on her school blazer (Vivunt Spe) also echoes Pericles’ motto in Shakespeare’s play: “He seems to be a stranger; but his present is / A withered branch that’s only green at top, / The motto: In hac spe vivo.”

Like Britain, Brit is stuck in a situation that dehumanize her and make her complicit in her own dehumanization. Florence, as the ‘blossoming’ in her name implies, comes in Brit’s life to split the seed, break the ground open, cross borders, and shake the characters’ consciences. Like Spring, Florence is “the great connective”: “The plants that push up through the junk and the plastic, earlier, later, they’re coming, regardless. The plants shift beneath you regardless, the people in sweatshops, the people out shopping, the people at desks in the light off their screens or scrolling their phones in the surgery waiting rooms (…) the people on motorways speeding past verges and scrubland like nothing is happening. Everything is. The flowerheads open all over the fly tip. The light shifts across your divides, round the people with passports, the people with money, the people with nothing, past sheds and canals and cathedrals, your airports, your graveyards, whatever you bury, whatever you dig up to call it your history or drill down to use up for money, the light shifts regardless. The truth is a kind of regardless”.

Unlike the two previous novels in the seasonal quartet, however, Spring (2019), the great connective, felt less cohesive; the precocious child too contrived; the plot uneven. Dismembering it and thinking about its different parts can be more satisfying than actually reading the whole thing. The highlight of the book lies in what it resists to deliver: “True hope is actually the absence of hope.”

Like the two previous novels in the quartet, Spring (2019) jumps back and forth in time; alludes to contemporary issues (mainly, Britain’s immigrant-detention policy, but also the austerity measures, the climate crisis, the #MeToo movement, the Brexit vote that framed Autumn, the fake news and post-truth state that framed Winter); showcases a female artist (here, it is Tacita Dean; in Autumn, Pauline Boty; and, in Winter, Barbara Hepworth); features the firm SA4A and postcards; mentions Charlie Chaplin and references Shakespeare and Dickens; and is rich in literary allusions.

True to the spirit of Spring, references to transformation, death and rebirth abound, as in Shelley’s “The Cloud” – which, in turn, invites us to an exercise of free association with Florence’s “Hot Air” notebook, and Tacita Dean’s short film A Bag of Air, in which Dean ascends the sky in a hot air balloon, in search of her childhood dream of catching a cloud (in a cloudless sky). The image of the cloud as something that cannot be trapped also mirrors the novel’s underlying discussion on imprisonment, walls, and borders. The cloud is an image that can be read in opposing ways: as the ability to see the bigger picture, or as the attachment to an unattainable goal; as an emblem of freedom, fresh air, and borderless space, or as a self-contained reality trapped from the inside, echoing itself endlessly (as in the social media rant with which the book starts).

The commentary on borders and the act of crossing them merges with the novel’s idea of interconnectedness. “What if, the girl says. Instead of saying, this border divides these places. We said, this border unites these places (…) What if we declared border crossings places where, listen, when you crossed them, you yourself became doubly possible.” Characters meet by happy accidents, or are connected by invisible links. Autumn’s Daniel Gluck reappears as a lover of Winter’s Sophie, and as a chance acquaintance of Spring’s Paddy. Autumn’s Elisabeth may be the daughter of Winter’s Richard.

Autumn and Winter were linked by a postcard from Daniel to Sophie. It’s a print of Eduardo Boubat’s Petite fille aux feuilles mortes jardin du Luxembourg Paris 1947. Autumn’s Daniel remembers having bought it in Paris in the 1980’s, and Winter’s Sophie is the postcard’s recipient. In Spring, the voice in Florence’s notebooks declares: “I’m the child who’s been buried in leaves”. In a later reference to refugees, we read: “Children with clothes as ragged as suits of old leaves”. Postcards also form a link between Spring’s Richard and his imaginary daughter (who may or may not be Autumn’s Elisabeth). Katherine Mansfield’s letters also play an interesting role in Spring: in the novel’s epigraph, we have an unsent letter found on her death and written shortly before – “I am looking for signs of spring already”. These words will be echoed in Paddy’s words to Richard: “The simple flowers of our spring are what I want to see again.” Both Mansfield and Paddy will never see spring again.

The book’s underlying anger, as if it only wanted to offer us a kind of regardless, is its redeeming feature to me. Rather than a simple, rosy-coloured offering of hope, it delivers us a dry branch slightly green at the top: a sense that we are not stuck in time nor move from past to future in a linear way, but rather down through time, endlessly. Not a sense of hope, but rather a perspective. The afterlife of despair.

War won’t stop, the story says. But enmity can. Things can change over time, what looks fixed and pinned and closed in a life can change and open, and what’s unchangeable and impossible at one time will be easily possible in another. – Ali Smith, Spring

4 thoughts on “The truth is a kind of regardless”