In Our Nig (1859), we follow Alfrado (‘Frado’), daughter of a white woman and an African American man. The novel opens with a cautionary tale: when young, Frado’s mother, Mag Smith, was seduced by a lover of higher social position, only to be later abandoned while pregnant. Ostracized by New Hampshire society, with no fixed income, no job, and no possibility of moral redemption, Mag accepts a marriage proposal from Jim, a black businessman.

Jim wants the social prestige of having a white wife and, in return, he provides Mag with home and food. From this bond, Frado is born. However, when the girl is around three years old, Jim dies of consumption, leaving Mag with no means of support. Soon afterwards, Mag starts to live together with Jim’s business partner, Seth. Unable to support the children, they decide to leave six-year-old Frado at the home of a local white family, the Bellmonts. 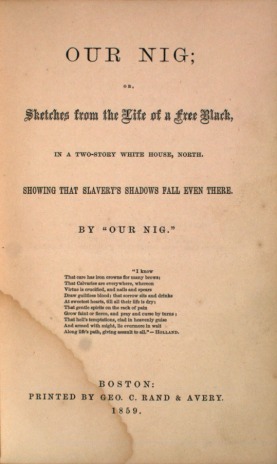 From the age of six until she is eighteen, Frado works as a servant for the family, in exchange for food and a place to stay. Since an early age, our heroine not only does all of the household chores, but also helps with the farm labour, working in slave-like conditions. Frado is brutally abused by Mrs. Bellmont, and you do not shy away from describing everything in detail: Mrs. Bellmont locks Frado inside the closet; starves her; abuses her verbally; gags her with rags and pieces of wood; and whips her with a rawhide.

Mr. Bellmont opposes such violence, but does not act on his beliefs, and just lets the girl be increasingly abused by his wife. He insists, though, much to Mrs. Bellmont chagrin, that Frado should go to school and learn to read. At school, she is initially discriminated against and bullied by her classmates, but gradually wins them over with her intelligence, her discipline, and her joyful wit.

In parallel to an unflinching description of Frado’s daily struggles to survive physical abuse and economic exploitation, we also have her coming of age journey to achieve a sense of personal value and self-worth, as well as her struggle to be recognized by others on equal terms as a human being.

Frado will eventually leave the Bellmonts, but her health will be forever frail, as a result of the abuse she suffered and the heavy labour she was forced to perform since her early childhood. She will eventually get married and give birth to a child, only to be abandoned by her husband shortly after. The book ends on a similar point where it started with her mother, abandoned and destitute – but with the important difference that, this time, the daughter has a voice (she is writing her story) and she is determined to be heard. She turns to writing as a means of supporting herself and her son.

The highlight of the book for me is its anger. You borrow from and play with different genres, but never settles for any of them, and the anger becomes its own genre. The book is told in third person, as a fictional work, but its semiautobiographical nature seeps into it through the preface, the three testimonial letters in the appendix, and, more importantly, the use of the first person in title of the first three chapters: “Mag Smith, My Mother”; “My Father’s Death”; “A New Home for Me”.

After Frado moves in with the Bellmonts, the chapters start to mention her in the third person, as “Nig”, mimicking the way the family members called her (and, possibly, representing her objectification and loss of autonomy through the shift from the first to the third person and the brutal imposition of the N-word).

While many slave narratives begin with the author thanking a white benefactor, you make a bold move and do not thank anyone. Slave narratives were the white abolitionists’ persuasion tools, and, as such, white abolitionists shaped the discourse in a way that didn’t include a person like Frado. There were only two possible black identities: as a slave in the south or a free person in the north.

Such a discourse either denied or remained silent about the racism and inequality faced by black people in the north, and left in the shadows the plights of a person like your Frado: although legally free, she was materially bound to the Bellmonts and had no means to free herself from their exploration and abuse. Like the white abolitionists’ hypocrisy you are exposing here, Mr. Bellmont knew Frado was suffering, but chose to look the other way and did nothing about it. You thank anyone, because there is no one to thank – yours is a slave narrative about a heroine who is not legally a slave, but is nonetheless enslaved; and it is a slave narrative that throws a critical light on the framing and appropriation of slave narratives by white abolitionists.

Your subtle reclamation of the power to frame is particularly interesting, because an important undercurrent running through this book is the idea of voice as a source of power. There is the scene where, thinking that Frado had told others about the abuse she suffered, Mrs. Bellmont violently punishes the girl, forcing a piece of wood into Frado’s mouth to silence her by keeping her mouth open. Frado’s moment of defiance is also framed as a choice to speak up: as Mrs. Bellmont is about to strike her, Frado yells ‘‘Stop!’ Strike me and I’ll never work a mite more for you’’.

Your book borrows elements from the traditional seduction tale, when it explores the idea of the “fallen woman”, but it does it differently: your fallen woman does not die nor is punished in the end. She gets married and moves on with her life.

Likewise, you borrow elements from the conversion narrative, only to slightly twist them: Frado’s is a secular conversion, a movement towards self-knowledge, and she is very sceptical of institutionalized religion. She cuts through the curtains and reveals the violence, racism and hypocrisy hidden inside seemingly pious Christian families. While Frado does experience Christian faith as empowering, she also sees that Christian institutions can deviate from what they profess and become sources of oppression.

As in coming of age stories, we follow your protagonist’s struggles and development, but here her triumph over the odds is never permanent. In a conventional romance, the heroine would be rewarded for her discipline and her faith, after enduring a difficult time; but, in your book, the difficult time never ends and there is no clear reward.  As in sentimental novels, your heroine will find love, but only briefly, as if it were only a sidenote. You write beyond the ending of the standard marriage plot, and here love is just another “arbitrary and inexorable tyrant”.

As in domestic novels, we follow the daily family life at the Bellmonts, but with a twist: here, the domestic is a dangerous place, and white women are no angels in the house. As in the captivity narratives, we have an innocent woman held captives by savages – but, this time, white women are the savage villains, and the black girl is their innocent captive.

The novella challenges the by then widely held beliefs about what it meant to be free, to be enslaved, to be equal, to be a (fallen) woman, to be Christian. It also undermines the then prevailing conflation of race, skin tone, class, and morality. No one is heroic in this book, and the ones who behave in the most abhorrent way are precisely those who loudly congratulate themselves on moral superiority.

Yours is a too disillusioned take on the subject to allow for the protagonist’s luxury of believing to have surmounted the conditions that had shaped her life. Rather than moving up or out, Frado is moving within a web of oppression. As in the poem you published in the periodical The Farmer’s Cabinet, on December 6th, 1851, your protagonist is a spark, and we watch it as it fades away.

“It was a great effort for Frado to cease sobbing; but she dared not be seen below in tears; so she choked her grief, and descended to her usual toil. (…) She moved about the house like an automaton. Every duty performed—but an abstraction from all, which shewed her thoughts were busied elsewhere. (…) The prayer caused profuse weeping, as any tender reminder of the heaven-born was sure to. When the good man’s voice ceased, she returned to her toil, carefully removing all trace of sorrow. Her mistress soon followed, irritated by Nab’s impudence in presenting herself unasked in the parlor, and upraided her with indolence, and bade her apply herself more diligently. Stung by unmerited rebuke, weak from sorrow and anxiety, the tears rolled down her dark face, soon followed by sobs, and then losing all control of herself, she wept aloud. This was an act of disobedience. Her mistress grasping her raw-hide, caused a longer flow of tears, and wounded a spirit that was craving healing mercies.” – Harriet E. Wilson, Our Nig

2 thoughts on “This was an act of disobedience”