The novella A Phantom Lover (first published in 1886, and later collected in Hauntings in 1890, as ‘Oke of Okehurst’) reads like a claustrophobic hall of mirrors, where the reflected image and the real thing behind it are blurred. We gradually lose sight of what is and isn’t real and who is the double of whom.

The story is told by a nameless portraitist who is commissioned by a squire, William Oke, to paint his wife. The narrator reluctantly agrees, imagining that life in the squire’s isolated country house will be too predictable and dull. Once there, however, he becomes gradually obsessed with the ancestral house, Okehurst, and its eccentric lady, Mrs. Alice Oke.

We soon begin to feel that there is something eerie going on in Okehurst – and the fascinating thing about this novella is that, much like its narrator, we feel increasingly attracted to something we cannot quite put a name on. As the story progresses, we find out that Alice is obsessed with a 17th-century female ancestor to whom she seems to bear a striking resemblance. This long-dead ancestor, also called Alice, is now just a mysterious woman in a painting, dressing the walls of the old house, but rumour has it that, one day, she dressed as a page and killed her lover, a poet called Christopher Lovelock.

The current Alice is obsessed with the 17th-century Alice, as well as with her lover Lovelock. Alice seems to believe that she is some sort of reincarnation of her ancestor: she even wears 17th-century clothes (and is given to crossdressing), and keeps Lovelock’s poems inside her writing desk in the mysterious yellow drawing room. Much like her husband, Mr. Oke, and our nameless narrator, we gradually become obsessed with her obsession.

Who is the double of whom here? Is the current Alice a doppelgänger of the 17th-century one? Is our (perhaps unreliable) narrator a double of Lovelock? Or is this a love triangle with an actual… ghost? Has Christopher Lovelock’s love survived through the centuries, or is he just looking for revenge? Is he just a figment of our imagination? Is Mrs. Oke just trying to drive her husband mad? Or is she really possessed – by the ghost of an ancestor, by the ghost of a dead lover, by an ancestral feeling? Are her husband and the narrator also undergoing some sort of possession?

“Such love as that,” says Alice, “is very rare, but it can exist. It becomes a person’s whole existence, his whole soul; and it can survive the death, not merely of the beloved, but of the lover. It is unextinguishable, and goes on in the spiritual world until it meets a reincarnation of the beloved; and when this happens, it jets out and draws to it all that may remain of that lover’s soul, and takes shape and surrounds the beloved one once more.” Is Okehurst a haunted house? And if so, who is haunting whom? Is the ghost a person or a feeling? What share does the narrator have in the outcome of the story?

I find fascinating the way how you also articulate the supernatural elements in the story within a larger discussion about art and what art does. Mrs. Oke is both the lady being painted and the artist playing with people’s imagination (including ours) and creating a yellow room inside their heads, a double of the yellow room of her own, an imaginary room to which she keeps adding eerie elements – as if the obsession she is feeding in other people’s minds also were some sort of painting she is making; as if art were the double of love and both involved some sort of possession, or had a haunting existence of their own.

I am reminded of the essay Beauty and Ugliness (1897, collected in the book of the same title, published in 1912), where you argue that the aesthetic experience is constituted by the interaction between matters of form (lines, curves, rhythm, movement) and one’s physical responses to a work of art, as well as by an interplay between what one projects of oneself into a work of art and, in turn, what the contemplation of this work makes to one’s body.

In Beauty & Ugliness and Other Studies in Psychological Aesthetics (1912) and in The Beautiful: An Introduction to Psychological Aesthetics (1913), you see one’s physical responses to a work of art as expressions of what Theodor Lipps and Karl Groos theorised as Einfühlung – the moment of feeling-into, of empathy or empathetic projection, of feeling oneself into the aesthetic object. In contemplating a work of art, one projects oneself into what is contemplated, and this moment of Einfühlung is the foundation of one’s aesthetic judgments: in this moment, the beholder and the object beheld merge, in a form of collaboration.

In The Beautiful: An Introduction to Psychological Aesthetics (1913), you argue further that the aesthetic experience extends beyond the particular moment of contemplation, leaving a residue upon which one can draw later. It is, therefore, of the nature of both art and ghosts that they perform a kind of possession, and that they go beyond the present moment: such as art outlasts both the moment of contemplation, as well as the artist and the person contemplating the work of art, your ghost in A Phantom Lover (or the feelings the ghost represents) is larger than the person possessed by it (the person who embodies the feelings represented by it). Like the aesthetic experience when we try to catch it, your ghost is both there and not there. It haunts and seduces us. And it may be an illusion.

I also like the way the story is framed as a conversation between the narrator and an unnamed person whose voice we never hear but who seems to be visiting the studio and perusing the sketches the painter had made of Alice. The narrator may as well be talking to us, or to himself, or to an invisible presence. He may be addressing a visitor, or he may be going mad. He never finished the portrait of Mrs. Oke, and we can see that it still haunts him, like an open question or an undying feeling, or the ghost of a feeling.

I am reminded of the end lines of your essay Limbo (1897): “Let us rather think gently of things, sad, but sad without ignominy, of friendships stillborn or untimely cut off, hurried by death into a place like that which holds the souls of the unchristened babies; often, like them, let us hope, removed to a sphere where such things grow finer and more fruitful, the sphere of the love of those we have not loved enough in life. But that at best is but a place of ghosts; so let us never forget, dear friends, how close all round lies Limbo, the Kingdom of Might-have-been.” All your characters in Phantom Lover (1886) are also trapped in a kingdom of might-have-been of their own. 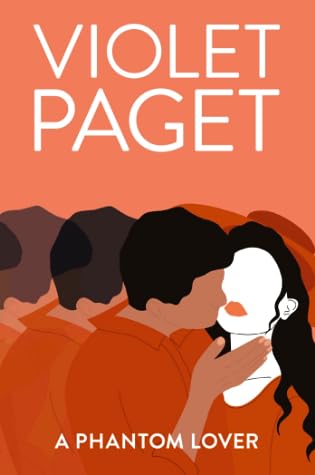 I love how you built the atmosphere in this novella, and the way the scenery, the house, and the characters’ internal landscapes seem to blend into one another. Okehurst is described as an ancient castle, a place outside time and space, or inside a fairy tale: “it seemed to me that I was being led through the palace of the Sleeping Beauty”. The character of Mrs. Oke is also described as a spectral figure, a presence that exists beyond its flesh, in the mind of others rather than in itself: “It is conceivable, is it not, that once in a thousand years there may arise a combination of lines, a system of movements, an outline, a gesture, which is new, unprecedented, and yet hits off exactly our desires for beauty and rareness?”

At a certain point, we feel that Mrs. Oke herself may be the phantom lover in the title – not Lovelock, not the 17th– century Alice, not Mr. Oke’s jealous hallucination, not the narrator’s imagination. No. Mrs. Oke herself. “There was something heady and oppressive in this beautiful room; something, I thought, almost repulsive in this exquisite woman. She seemed to me, suddenly, perverse and dangerous.”

The narrator frames Mrs. Alice Oke’s obsession as the centre of the narrative, but what we get is a decentred web of obsessions, something much more complex. Mr. Oke starts to descend into murderous jealousy and hallucination. The narrator’s stay at Okerhurst seems to be acting as a magnifying glass to Mr. Oke’s obsession with his wife’s obsession. Not only that, but the narrator himself seems to be going through a rabbit hole of his own: in the key scenes, even his narration style seems to become impressionistic, blurred, as if he were projecting the past into the present, like a second skin; or as if he were sleepwalking through a dreamscape, or seeing brush strokes instead of the painted images behind them.

In yet another doubling, the narrator’s own obsession with Alice gradually feels very similar to her obsession with Lovelock. Now that the only thing left of Alice are his sketches of her, the narrator is doomed to carry the Okehurst’s ghosts forward, as if he were cursed, poisoned or infected, trapped in a cycle of endless repetition, and forever haunted by the presence of an absence.

“The panes of the mullioned window were open, and yet the air seemed heavy, with an indescribable heady perfume, not that of any growing flower, but like that of old stuff that should have lain from years among spices.” – Vernon Lee, A Phantom Lover