How many stories can fit inside one story? Comparing the two versions of the tales collected in Coyote Stories (1933) and Tales of the Okanogans (1976) is like reading in different layers: we have the story as you told it; the story as your edited tried to frame it; and, finally, the story behind that framing. 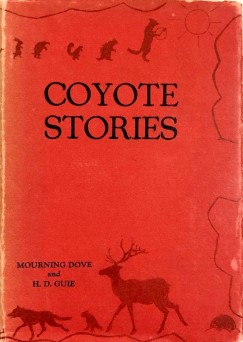 One of my favourite stories in the collection is the one about Chipmunk and the Owlwoman. It is even said that your novel Cogewea (1927) could also be read as a rewriting of this tale (and the title of the novel is taken from the Okanogan word for ‘chipmunk’). I will take a step back and read this story in different versions: it appears as “Chipmunk and Owlwoman”, in Coyote Stories (1933, edited by Heister Dean Guie); as “Coyote kills Owlwoman”, in the Tales of the Okanogans (1976, based on your typescript); and as “Owlwoman and Coyote”, in The Norton Anthology of American Literature – A (based on your manuscript).

The plotline is the same in all versions. We follow Chipmunk (Kots-se-we-ah), a mischievous girl who lives with her grandmother. She enjoys to scamper around and climb on her serviceberry bush (see’-ah – known as Amelanchier alnifolia).

One day, while the girl is up in the bush eating ripe berries, there comes the Owlwoman (Snee’nah), an elderly woman who steals children, carries them inside a big basket, and later eats them. For a good reason, the Owlwoman is greatly feared by all children and parents.

Chipmunk is a smart child and it is not easy to lure her down, but, after a battle of minds, the girl fails to outwit the Owlwoman, and ends up coming down the bush. Chipmunk might not be as smart as Snee’nah, but she is faster: the girl jumps over her nemesis and runs away, and the Owlwoman only manages to scratch Chipmunk’s back with her claws, leaving a mark that the girl carries to this day. According to the version of this story collected in the Coyote Stories (1933), ever since that day, chipmunks have carried on their backs, in the form of dark stripes, the marks of the Owlwoman’s claws.

Chipmunk runs to her grandmother and asks for help. The old woman tries to hide the girl on a succession of places – inside a pillow (in the Coyote Stories’ version, it is a ‘bed’), inside a basket, and even inside the soup (in the Coyote Stories’ version, it reads ‘in a basket of soup’) – , but no place is good enough: the girl moves too much, makes a lot of noise, and nearly drowns in the soup.

When the two are almost losing hope, they hear the song of Meadow Lark (Wy-wetź-kula), who flies closer and suggests that the girl should be hidden between two oyster shells. The grandmother promptly obeys and gives Meadow Lark a necklace, to keep her from telling the Owlwoman where Chipmunk is hidden.

Snee’nah arrives soon afterwards and looks for Chipmunk everywhere (in the pillow, the basket, the soup), without success. Meadow Lark then flies back and, in exchange for a yellow vest, tells the Owlwoman where the girl is hidden.

Chipmunk is then taken out of the oystershells. Snee’nah cuts her open with her claws, takes the girl’s heart out, and swallows it: “Yum-yum-yum. Little girl’s hearts are the best.” The Owlwoman then leaves on a full stomach and with her basket full of children.

But the story does not end here. When everyone least expects, Meadow Lark flies back to the old woman’s house and sings: “Put a berry for a heart, put a berry for a heart.” The grandmother immediately obeys, puts a half-ripe see’-ah berry inside Chipmunk’s breast, sews it, and the girl jumps up alive. The play on words is also interesting: a heart eaten by Snee’nah is then replaced by a see’-ah.

And the story does not end here either. On her way through the woods, the Owlwoman meets Coyote, who tells her that he loves to eat bad children and that the two should travel together. Intent on making use of Coyote’s powers and hunt more children, she agrees, and the two start to walk together.

Coyote then suggests that they should make a big bonfire and roast the children she has on her basket, which would taste much better than if simply eaten alive. The Owlwoman is much taken with this ground-breaking idea, and they enlist the children themselves to prepare the fire. You can imagine that the children are not very pleased with this idea, but Coyote whispers that everything is part of a plan to save them.

He then says out loud that everyone should dance around the fire, and the Owlwoman happily agrees. They dance and dance, until she starts to get tired and stumbles. Coyote then knocks her into the fire, enlists the children to use forked sticks to keep her there, they gladly comply, and the Owlwoman burns to death. End of the story.

But not exactly. The version of it in the Coyote Stories (1933) ends with an edifying moral lesson: “Bad persons always must pay for the evil workings of their minds”. The two other versions, on the other hand, do not add any final lesson, and are more descriptive when it comes to the violence of the Owlwoman’s death: her face and arms blaze instantly, her eyes burst, and from them flies a small owl, which is forever doomed to travel by night and to remain blind in daylight.

It is already common knowledge that the tales in Coyote Stories (1933) were greatly altered by its editor, so that the book would be sold to a white audience. But it is still baffling to me to see how much this editing process actually meant fitting the book into the white stereotype of what a collection of stories by an Indigenous woman should be to them: morally uplifting (and here we should read: uplifting according to Christian morality); strained of all the violent details; written in short, simplified sentences, as if by a child; reduced and explained; and stripped of all the lively descriptive pleasure of oral storytelling. They stripped your story of its heart, but forgot to put the berry back inside.

4 thoughts on “Put a berry for a heart,”