Kolmar was born in Berlin as the eldest of four children. She grew up sheltered in an upper-middle-class family, but seems not to have had a happy childhood. Kolmar had a fraught relationship with her mother and felt closer to her father Ludwig, a wealthy Prussian-Jewish criminal lawyer who was strongly absorbed by his career.

As a child, Gertrud performed most of the household chores. From an early age, she showed herself to be an introspective, artistically gifted girl: she loved dancing, and wrote small plays, which she performed with her siblings and friends. Gertrud was considered an outsider, and her relatives called her “Crazy Trude” (“Verrückte Trude” – Trude is a diminutive of Gertrud).

Gertrud attended a secondary school for girls in Berlin, and then a women’s home economics school near Leipzig in 1911/1912. After finishing school, she left Berlin from time to time for shorter training and study trips. In 1916, Kolmar passed the exams to become a teacher, and received a teaching degree as a French and English language instructor and military interpreter. She also spoke Russian, Czech, Spanish, Flemish, and, later in life, Hebrew.

During the First World War, she worked as an interpreter in the Döberitz prison camp near Potsdam. Around this time, in 1915, Gertrud had an unhappy love affair with the German officer Karl Jodel. She became pregnant, the officer left her, and her parents forced her to have an abortion. In 1916, after the end of the affair, she tried to take her own life. The topics of death, unrequited love, loneliness, longing, and unfulfilled motherhood will appear repeatedly in her writings.

In 1917, her father urged her to publish her first poetry collection, Gedichte (1917), under the pseudonym Gertrud Kolmar (the German name of the Polish town Chodziesn, where her family came from, in the then Prussian province of Posen, renamed Kolmar in 1878).

Shortly after the First World War, Kolmar started working as a tutor and teacher in private households in Berlin, Leipzig, and Hamburg. In 1927, she went on a study trip to France, and took a summer course at the University of Dijon, where she graduated with a teaching degree. In 1928, she moved back into her parents’ house to look after her mother, who had fallen seriously ill.

Her mother died on March 25, 1930. Gertrud then took over the management of the household, and started working as her father’s secretary. Her cousin Walter Benjamin helped her to make important literary contacts, and she continued to publish her poetry in newspapers, magazines, periodicals, and anthologies. From 1930 to 1931, Kolmar wrote a novel, Die jüdische Mutter (The Jewish Mother), which first appeared in 1965, as Eine Mutter (A Mother) and then in 1978 as Eine jüdische Mutter (A Jewish Mother). Elisabeth Langgässer published some of Kolmar’s poems in an anthology of women’s poetry in 1933. Gertrud also found initial support and recognition from Nelly Sachs, Oda Schaefer and Ina Seidel (after 1933, however, Ina Seidel, aligned with the Nazi government, distanced herself from Kolmar – and later, after 1945, boasted of her friendship with Gertrud…).

In 1934, Gertrud published her second volume of poetry, Preußische Wappen (‘Prussian Coat of Arms’). From 1936, Kolmar was no longer allowed to publish under her pen name, only under her family name Chodziesner. In 1936, three of Kolmar’s poems were published in a journal of the Jüdische Buchvereinigung. In 1938, her collection Die Frau und die Tiere (‘The Woman and the Animals’) was published by the Jüdische Buchverlag Erwin Loewe (which was forced to shut down two months after the book came out, during the November 1938 pogrom). Shortly after the November pogrom, Kolmar begun sending her most treasured manuscripts to her sister in Switzerland, and to Hilde Benjamin, the wife of her cousin Walter’s brother.

Kolmar published three collections of poetry during her lifetime, but never aimed at success: “… I never work out of a feeling of elation and strength, but always out of a feeling of powerlessness.” When, one day, she unexpectedly found her name in a newspaper next to Dostoyevsky, she wrote in a letter to Jacob Picard, on November 14th, 1937: “Do you know how I felt? It’s difficult to describe – but maybe that’s how Andersen’s ‘ugly duckling’ felt when he finally got among the swans and the water, as a mirror, showed him that he was a swan itself …“

Later, in a letter to her sister to Hilde Wenzel, on October 16, 1938, she wrote: “… even if I were proclaimed the most important Jewish poet since Else Lasker -Schüler, this wouldn’t excite me very much. Dad would be happier than me. There was a time when I was able to enjoy and encourage other people’s praise (…) Today, even without the help of a critic, I know what I am worth as a poet; what I am and what I am not able to.“

While her siblings and relatives left Germany in 1933, Gertrud Kolmar stayed home to look after her father. In 1938, As a result of the intensified persecution of the Jews, they had to sell their house and move into the “Judenhaus” (the so-called Jewish house in Berlin-Schöneberg), and Kolmar was not able to publish her work anymore. She initially considered emigrating to England to work as a governess, in 1939, but gave up the plan, so as not to leave her father behind. In a letter to her sister Hilde Wenzel, on September 16th, 1939, she wrote: “But the future is dark. And even if it were possible for me to get away from here soon, I feel I am not allowed to make use of this possibility; because, right now, I cannot and will not leave dad alone.” She also hoped to emigrate to Palestine, where one of her uncles lived, but could not get a Visa.

Kolmar continued to write, and finished her short story Susanna, around this time, in 1940. In mid-1941, she was forced to work at an armament factory. In a letter to Hilde Wenzel, on July 19th, 1942, Gertrud writes: “The earlier times, when we were “very well”, were not for me; they required qualities, mostly social, which I largely lacked. But I have what the current times demand. As a child, I dreamed of being a Spartan, and later I wanted to be a heroine. I urged Mutti to make me the “Spartan black soup”, and I liked our lentil soup so much because Dad said it was Spartan. (…) Today I no longer need to resort to imitations; I can be an “original hero”, which was not even in good form in my youth”.

In September 1942, at the age of 81, Kolmar’s father was deported to Theresienstadt, where he was killed less than a year later, on February 13th, 1943. Gertrud Kolmar was arrested on February 27th, 1943, and deported to Auschwitz on March 2nd, 1943, where she was gassed – presumably, immediately upon her arrival. The exact date of Kolmar’s death is unknown. In 1951, the date of March 2nd, 1943 was established by a court of law as the day of Kolmar’s death.

Gertrud Kolmar’s sister, Hilde Wenzel, wrote: “Then there were no more letters. Gertrud Kolmar was abducted and no one has ever heard of her again. Nobody knows the hour of her death, nor the day of her death. No memorial stone tells of her. But she will continue to live in her work.”

Gertrud Kolmar, of whose work relatively little appeared during her lifetime, is now considered one of the most important German-speaking poets of the 20th century, along with Nelly Sachs, Christine Lavant, Rose Ausländer and Else Lasker-Schüler. In 1956, Kolmar was posthumously awarded the German Critics’ Prize. Peter Hamm called her “Kafka’s spiritual sister”. 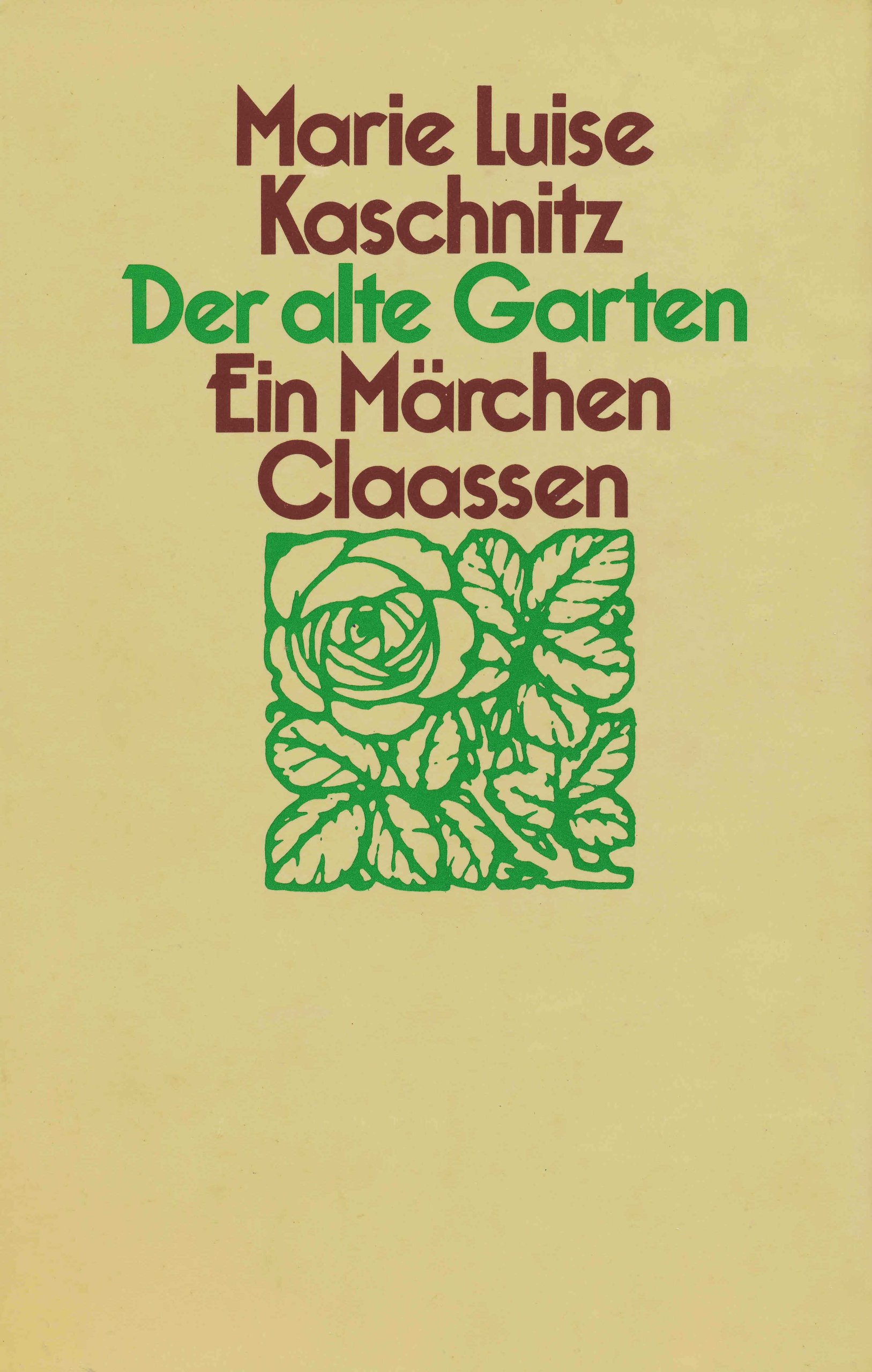