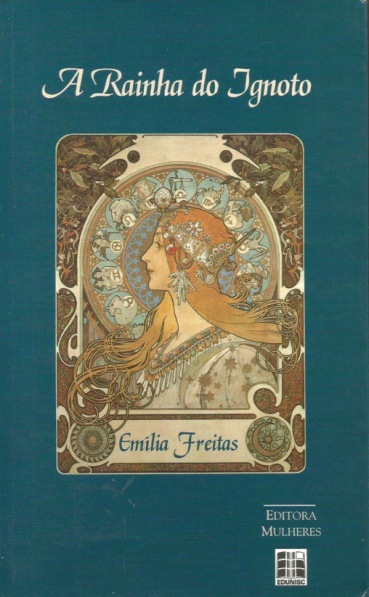 Your novel A Rainha do Ignoto (1899, ‘Queen of Ignotus’) is like a chameleon: when we least expect, it changes colour.

When a young bachelor, Edmund, arrives in the small village of Passagem das Pedras, in the Brazilian province of Ceará, he starts to hear rumours about a mysterious woman – initially known by the locals as Funesta (something like ‘The Disgraceful’, ‘The Baleful’, ‘The Fatal’) – who possesses secret powers and lives in a cave by the river bank. Initially sceptical about the existence of such a figure, Edmundo finally sees her, one night, as she is sailing along the river, singing a French song and playing the harp. She is accompanied by two creatures that, from a distance, look like evil-looking fantastic beings.

You seem to be playing with regional imagery (such as the river, the woman on a boat, like a kind of Iara – a figure from Brazilian mythology, similar to a water nymph or a siren), as well as with elements from the Western European tradition (such as the character Diana, daughter of the local hunter; the character of the orphan despised by her stepmother, like a Cinderella; or the image of the woman playing the harp, like a Greek goddess) and Christian iconography (the eponymous Queen of Ignotus is portrayed as a kind of saint).

In the initial chapters, we have a mix between fantastic anecdotes related to the Funesta and social satire where you throw a sharp light to the limitations faced by women in their day-to-day lives in Ceará. Marriage is the sole future a woman is allowed to aspire to, and many choose their husbands (or are chosen by them) in order to climb the social ladder.

The story soon changes colour, though, and the satire turns into a utopia: we learn of the existence of a secret kingdom, called Ilha do Nevoeiro (‘Fog Island’), inhabited only by women and presided by Funesta, who is also called Queen of Ignotus. Furthermore, the island is located on the Brazilian coast and is hidden from the rest of the world by a trick of hypnotic induction carried out by the women who live there (called the Paladins).

Fog Island is like a parallel world, kept secret from most men – a world that men can only enter if they put themselves in a woman’s shoes. There, women perform all the activities that are forbidden to them in the ‘real world’ outside the island: they can work as engineers, medical doctors, scientists, soldiers… Moreover, the inhabitants of Fog Island are all women who have found no place in the ‘real world’ – women who have been abandoned by their lovers or by their family, women who have lost everything they had, or who have been branded as mad.

Obsessed with Funesta, Edmundo plots a way to have access to her kingdom: he dresses as one of the Paladins, Odete, a mute woman who had recently died. In a social context where women are the ones who remain silent and who follow orders, you create a parallel universe where the roles are reversed: Edmundo is the one who is silenced and has to obey orders – not the women. He is the outsider, the element of the external world that is in tension with everything that Fog Island represents.

We learn that the Queen and her paladins frequently visit ‘the world outside’ to perform a variety of missions: such as save women from bad marriages, help slaves to escape, or rescue the victims of a shipwreck. To be able to perform their missions ‘in the real world’, however, the paladins must often dress in men’s clothes and behave like men – as women, they cannot perform male activities outside of Fog Island, unless they present themselves as men. Yours is a story where a man passes as a woman and women pass as men, which throws a sharp light to gender roles of the time.

Edmundo plays a curious role in the story: he is neither the protagonist nor the narrator, but something like a bridge between the ‘real world’ of Passagem das Pedras and the utopian (or fantastic) world of Fog Island; and, at the same time, he is the bridge between the ideas that you are trying to explore in the story and the reader. It is through Edmundo’s eyes that we are able to have access to the ideas represented by Fog Island; and it is through him that we evaluate those ideas.

We also have a sense that Fog Island and the adventures he lives there change the way Edmundo sees life: the Queen and her paladins destroy Edmundo’s certainties. His behaviour towards women changes when he sees the negative consequences of the misogynistic aspects of the ‘real world’ in the lives of the women whom the Queen goes out to save.

The changes that Edmundo is going through also mirror the change that you seem to want to make in the reader: Fog Island is this fictional space where criticism of the Brazilian society at the time is made possible. And it also seems like a tale of seduction, as Edmundo surrenders to the values ​​represented by the Queen of Ignotus and her kingdom. Fog Island is a universe that both reflects the real world outside (the world ruled by men), and criticizes this world, envisioning an option to it. It is an invented universe that imagines itself as possible, and that places itself in critical tension with the real world.

The Queen of Ignotus is this character who, like Virginia Woolf’s Orlando, seems to have existed forever; a woman who traverses space as Orlando traverses time. Like Orlando, the Queen is a transgressive character. She transgresses identities by shuffling them: in order to perform her missions, she often changes her face and name. Depending on the occasion, she is Funesta, Diana, Blandina Malta, Zuleica Neves, Zélia. She incorporates a series of mythical elements, and does not limit herself to any of them: sometimes, she behaves like a saint; other times, like a witch.

She is not the typical good-natured, fragile, and compassionate heroine – she feels anger, despair, loneliness, and she even seems to be endowed with a superhuman physical strength. In this sense, too, she is a woman who does not accept limitations on her freedom – angel / demon, pure / impure, sacred / profane, all dualities together in one being. The Queen of Ignotus also has a quixotic nature: she is like a wandering knight, and each chapter brings a new adventure. But the mills she fights against are real mills, and only the weapons she uses are made of wind – or, in her case, fog.

The Queen transgresses not only identity, but also the social standards of her time: she is a spinster in a society in which marriage is a woman’s only option; a republican in a monarchy; a pacifist in a militarist society; an abolitionist in a place where slavery still exists; and a follower of spiritism in a Catholic society. By fusing elements such as fantasy, gothic, utopia, dystopia, adventure, romance, and satire, the book itself transgresses genres, just as the Queen transgresses gender roles and social standards

What are we to make of the title of the novel? What is ignotus, what is unknown – the island, women’s lives, the oppression suffered by women, women’s possibilities outside of marriage?

As fascinating as your novel is, it is also, in many aspects, a product of its time. The Queen, with all her contradictions, is portrayed as a redemptive figure who assumes the duty to take care of the pain of others, as a martyr, capable of all sacrifices for the good of humanity (a kind of Florence Nightingale of the Amazon River). This is still a very limited view of what may be the role of women in the public sphere, and it is a view very much marked by the 19th century male perspective on women.

It is as if you wanted to base your novel on the idea of ​​equality, but was still groping to find out what equality really means. As critical as you were of arranged marriages and of the lack of career options for women, you seem not to have been able to renounce the centrality of marriage for women in your book, as well as the belief that a woman’s personal fulfilment is incompatible with the choice to play a role in the public sphere, so that the price of emancipation, in your book, is loneliness: the conflict between a woman’s freedom and the demands of patriarchy is reduced to a personal, individual conflict.

From the beginning, we have a sense that, plagued by its contradictions, Fog Island will never touch the ‘real world’, and will collapse like a house of marked cards. What we don’t know is whether this will happen by an act of capitulation, or one of insubmission. Perhaps this is also a point where the novel is undergoing another colour change.

“Ah, but I am addicted to being kind. Ah! I love this unjust, ungrateful and selfish humanity… I do good mechanically, as a destiny, a propensity, like that of being drunk by despair!” – Emília Freitas, A Rainha do Ignoto, my translation

“Who was that woman? – he thought. Where did she come from? Where was she going? Was she the angel of longing, lost in the solitude of the night? Could the melancholy notes of that song translate the poem of an infinite love buried in the ashes of the heart? Why did that beautiful, romantic and ideal creature combine the sublime and the horrible?” – Emília Freitas, A Rainha do Ignoto, my translation