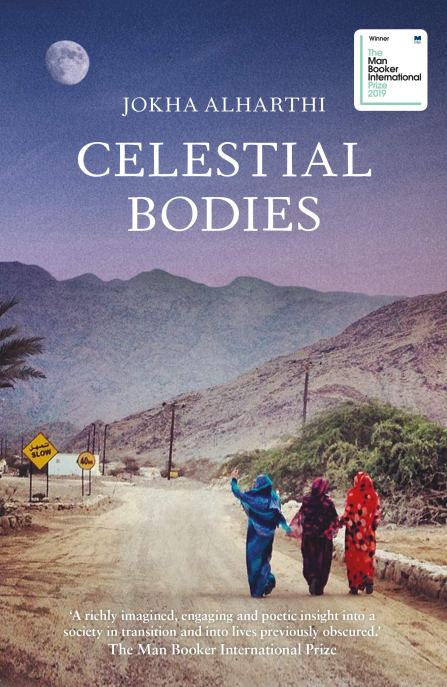 Celestial Bodies (2018, tr. Marilyn Booth. Original: Sayyidat al-Qamar, 2010) revolves around a family and their household members, in an Omani village, in the late 20th and early 21st centuries. We follow three sisters, Mayya, Asma, and Khawla, as well as their parents Salima and Azzan, as they fall in and out of love, get married, and raise their children, against a backdrop of great social and cultural shifts in Oman.

The story opens with the betrothal of Mayya and Abdallah, the son of a rich merchant. Despite harbouring a secret love for a young student who has just returned from England, Mayya consents to an arranged marriage. Later, when her first child is born, she names her ‘London’, which comes as a big shock for everyone in the family.

The bookish Asma, longing for the freedom that only marriage could afford her, agrees to marry Khalid, an artist obsessed with painting horses, for whom the perfect wife should be a women who would agree to fall “into the orbit he had marked out, who would always be there but would also always stay just outside, yet without wanting to create her own celestial sphere, her own orbit.” After some initial difficulties, Asma eventually learns to be “her own constellation, independent and whole, a sphere unto itself.”

The third sister, Khawla, known to be the family beauty, refuses to enter into an arranged marriage with Khalid’s brother, and instead waits for her cousin Nasir, whom she believes to have been betrothed to since childhood, to come back from Canada. They eventually marry, but Nasir goes back alone to Canada, where he keeps a girlfriend. When, after many years, he finally decides to go back to Oman and live with his wife and children, Khawla surprises everyone by filing for divorce.

Not much later, Mayya and Abdallah’s daughter London, now working as a physician, goes against her parents’ wishes and marries the man she loves, Ahmad, a poet whose parents had been peasants. Ahmad, however, turns out to be a violent man who sees their marriage as some sort of class revenge. Contrasted with her mother’s silent consent to marry the man chosen by her family, we have London’s independence and fierce will to marry whom she pleases, in a generational clash that will later be symbolically conveyed by the scene where Mayya furiously breaks London’s cell phone. London will eventually get a divorce, but not before experiencing much reluctance in revealing her husband’s abuse. While her independence went a long way with respect to choosing her life partner, it found an unexpected limit in her own feeling that she had a duty to stand by the choice she had made – as if freedom should be payed a hard price.

I like the way you never simplify the several types of clash that are at the heart of your book: past and present, necessity and choice, duty and freedom. Rather than opposing poles, tradition and modernity play out in the story as juxtaposed threads, or as two celestial bodies kept together by a shared gravitational pull.

Woven through the sisters’ lives we have the story of the family’s former slaves. Abdallah’s father, Sulayman, a wealthy merchant who had made his fortune from the slave trade, kept one of his slaves, Zarifa, as a mistress. Abdallah’s mother dies when he is very young, and he is raised by Zarifa who, despite the abolition of slavery in Oman in 1970, remains with the family. Zarifa also occupies an ambiguous position: while she doesn’t have the social status of the higher-born women in the village, she is also not bound by the social duties such a status implies, which means that she can move more freely and do as she pleases; while she is not a slave anymore, she feels bound to Sulayman’s family; although she is uneducated, she is an endless source of traditional wisdom, and always finds the perfect proverb for each situation. 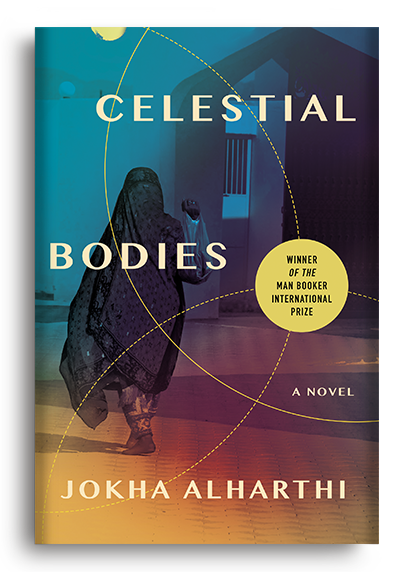 Zarifa’s son, Sanjar, tired of the servile life they lead under Sulayman’s favour, eventually emigrates to Kuwait: “Open your eyes. The world has changed.(…) While everybody’s gotten educated and gotten jobs, you’ve stayed exactly where you always were, the slave of Merchant Sulayman. (…) We are free, and everyone is his own master, and no one owns anyone else. I am free and I can travel wherever and whenever I like”, he says to Zarifa.

Roaming on the edges of the story, we have Najiya, a Bedouin woman also known as Qamar, or Moon, who is the lover of Mayya’s father, Azzan. She is a mysterious figure who does as she pleases and abruptly disappears in the story, as if she were a nomad leaving the book the same way she would leave a settlement. “I wasn’t created to serve and obey some man. Some fellow who would steal what should be mine and keep me from seeing my brother and my girlfriends! (…) He’ll come to me when I want him, and he’ll go away when I say so”.

Literally translated, the novel’s title would be “Ladies of the Moon”, which refers back to the legend that occupies Asma’s mind throughout the book (and which reminded me of Aristophanes’ speech in Plato’s Symposium): people, originally created as spheres, were split in two, and each person wanders incomplete in the world, looking for their lost half.

I should have liked that some storylines had been explored more deeply, such as Zarifa’s, Asma’s and Khawla’s. But the highlight of the book, for me, is the way it combines different timelines, so as to give us a strong sense of how much the past and the present are juxtaposed in each story: rather than a linear progression from tradition to modernity, transitions happen as if in an elliptical orbit, time is just space in movement, and past and present are overlapping planets. The characters seem to be retracing similar orbits again and again, and the same scene is sometimes retold from different perspectives.

Like a rotating constellation, the narration alternates between third-person chapters and chapters narrated in first person by Abdallah, as he muses about the past and drifts in and out of sleep on an airplane to Frankfurt. Here and there, we have poems, proverbs, and stories nested within each other, true to Arabic storytelling tradition. Although Abdallah is the only one to be given voice, rather than being the central star, his story seems to be rotating around the others, in a movement whose centre we can never quite locate, as if a whole universe were loosely held together by a blank space.

“Do you see the way people move life – and I mean, just the bits of their lives you can see? Most of their movement through life is invisible, it goes on inside of them, so for us it exists beneath the surface. Their own private worlds, their imaginations. When I liberated myself from living through my father’s head I created my own imagination with a paintbrush.” Celestial Bodies, by Jokha Alharthi, tr. Marilyn Booth

“She received the news of his death in silent submission. She arranged the funeral rites as well as she could in her modest circumstances, for his uncle refused to offer the slightest help or to mourn. She died, though no one knew she was dead. Every day and every night, for ten years, she died a little more. She breathed and ate and drank but she was dead. She spoke to people and walked among them, dead. Only much later did her body give up its already-deceased spirit, its dead spirit, no longer forced to pretend, to play at being alive.” Celestial Bodies, by Jokha Alharthi, tr. Marilyn Booth

“When I could finally shake myself loose, when I managed to no longer live inside the image of me he had in his head, I finally found out what freedom tastes like. It was such a good taste! People choose their own books, ones they actually want to read. And their own friends, and the cities they’re fond of. How liberated a person feels when it’s finally no longer a question of being just an extension or embodiment of someone else’s fancy, even if that someone else is your father.” Celestial Bodies, by Jokha Alharthi, tr. Marilyn Booth

2 thoughts on “Their movement through life is invisible” 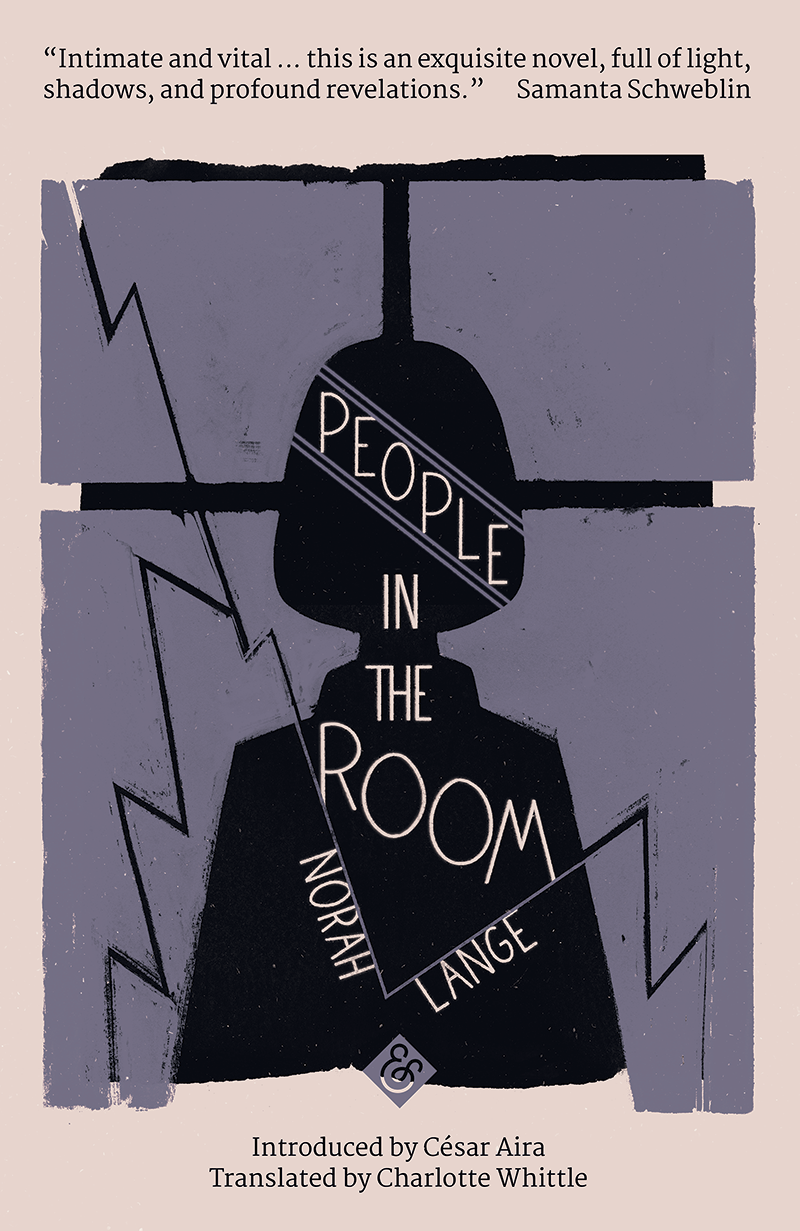