“The night before, Helen tried to drown herself. She did not know why, for she had been perfectly happy.” You know you are in for a treat when a story opens like that. We then go back a little to the moments just before the protagonist’s suicide attempt, when she is engaged in a discussion about… the difference between the Virgin Birth and the Immaculate Conception? Yes, and what next? “She wasn’t very clear what happened next.”  Neither are we. Afloat in the protagonist’s dreams and hallucinations, we are taken through a nightmarish series of scenes where real and imaginary are blurred.

“She had forgotten her name.  She did not know whether she were very young or very old; a man or a woman.” She seems to be in a mental institution, paraded by a disturbing flock of nurses, priests, nuns, relatives, ghosts, a procession of mothers who have lost their sons to the war.

“And each time a woman came in, Helen went through a new agony.  She became the dead boy.  She spoke with his voice.  She felt the pain of amputated limbs, or blinded eyes.  She coughed up blood from lungs torn to rags by shrapnel.  Over and over again, in trenches, in field hospitals, in German camps, she died a lingering death.  Between bouts of torture, the mothers, in their nurses’ veils, would kiss her hands and sob out their gratitude.”

Like a wounded, shell-shocked soldier, Helen is gradually engulfed by the wild turnings of her mind. And this story tries to do to the reader what madness does to the protagonist. It’s violent, claustrophobic, and dangerously fascinating.

This story is carried out by dialogue written in the vernacular. We have three working-class women on ‘nights out with the girls’, they meet three men, we don’t know exactly who picks whom. Off they go for an unauthorized night swim, only to be almost caught later on. It is like being caught in the midst of a group where everyone seems to be talking at the same time, and we try to pick up the threads of the conversation. Nothing happens, it is not often clear who is speaking, but we are caught in the rhythm, in the sheer exuberance of it.

“Is it ever wrong to do what you want to?

He leant back against the concrete wall, scrawled over the chalk drawings and girl’s names, the silver chain taut against his narrow throat. Then he says, ‘Do me a favour’

“The Silence of the Sirens” (Das Schweigen der Sirenen), by Franz Kafka (1931. English translation by Willa and Edwin Muir, 1933. Also in: The Complete Stories and Parables, 1983)

This is a brief exploration of Ulysses’ journey, at the point where he meets the Sirens. In Kafka’s version, Ulysses not only had himself tied to the mast of his ship, but also stopped his ears with wax, to protect himself from the lure of Sirens’ singing. “The song of the Sirens could pierce through everything, and the longing of those they seduced would have broken far stronger bonds than chains and masts.”

Little Ulysses did he know, however, that the Sirens’ singing is far more tempting and alluring precisely when one is not able to hear it. “Now the Sirens have a still more fatal weapon than their song, namely their silence”. When Ulysses approached them, the Sirens fell silent. “But Ulysses, if one may so express it, did not hear their silence; he thought they were singing and that he alone did not hear them”.

Initially, it is hinted that our hero escapes danger precisely because he is oblivious to its existence – he ignores the fact that the Sirens are silent, and thus silence cannot hurt him. Not only that – his blissful ignorance has the potential not only of saving him, but also of annihilating the Sirens themselves. “They no longer had any desire to allure; all that they wanted was to hold as long as they could the radiance that fell from Ulysses’ great eyes. (…) If the Sirens had possessed consciousness they would have been annihilated at that moment”. Without their silence, they are nothing.

But is Ulysses really oblivious? Did he hear the Sirens’ silence after all? Why did he choose to pretend otherwise? “Ulysses, it is said, was so full of guile, was such a fox, that not even the goddess of fate could pierce his armor. Perhaps he had really noticed, although here the human understanding is beyond its depths, that the Sirens were silent, and held up to them and to the gods the aforementioned pretense merely as a sort of shield.”

When the director of a film that proposes to chart a lesbian relationship comments about said film that “People so far have said they sort of forget it’s between two women”, it’s time to pause and reflect: is this film yet another embarrassing heteronormative take on a queer relationship? The sad answer is to be found one degree lower in the scale of cinematic embarrassments: this film doesn’t even know what it wants to be. 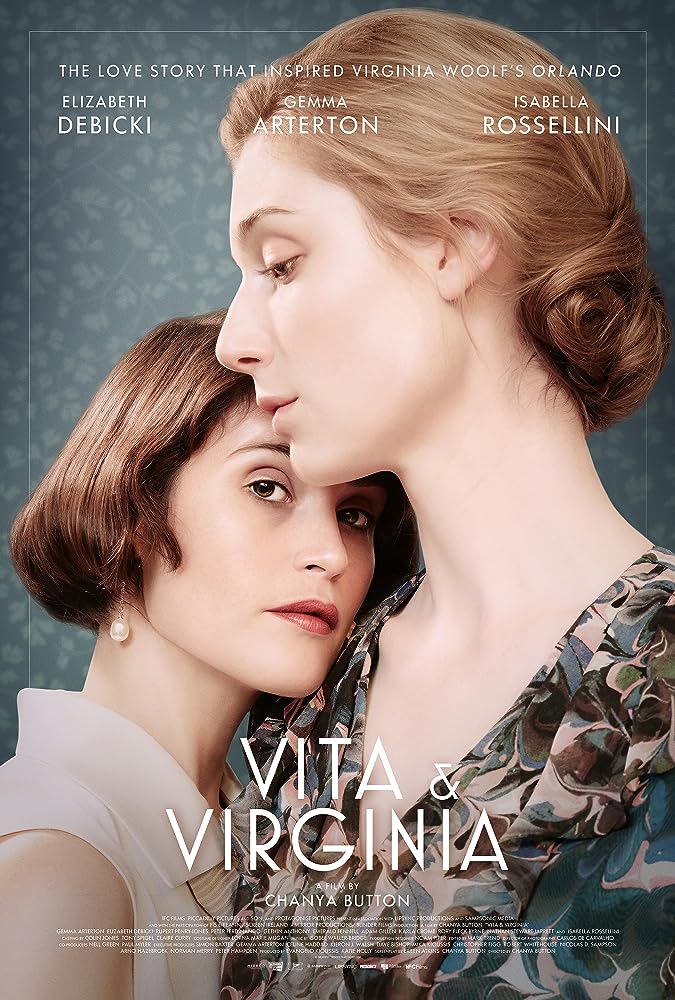 Adapted from Eileen Atkins’ 1992 play “Vita & Virginia”, the film charts the love relationship between the eponymous writers, from their first meeting at a dinner party (here transfigured into a bohemian costume party), on December 14, 1922, to the waning of their love affair and the writing of Orlando (1928) – “the longest and most charming love letter in literature”, according to Vita’s son, Nigel Nicholson.

What this film gets right: the fact that the relationship between Vita and Virginia was not a merely intellectual, sexless affair – from the beginning, the film is at pains to convey sensuality – it pauses over the lips of Vita and Virginia as they lick the envelopes of the letters they send each other; it pauses over Virginia’s finger, as she presses it to Vita’s chest.

What this film gets wrong: everything else. From the theatrical monologues and stilted, pretentious dialogues, to the forced device of filming the protagonists looking directly into the camera as they read aloud from their letters. When, at some point, one of the characters says: “You must remember that Virginia is vulnerable under all her brilliance”, we cannot help but to cringe.

The main problem is that the director seems to have wanted to please both sides of the public: the one who have crystallised Virginia Woolf into an ethereal, sexless, otherworldly genius; and the ones who would delight in their outrage. The result is a film that glosses over contradiction, lacks in nuance, and takes its subject as something too precious to be explored more deeply or to be, eventually, desecrated. One can never have it both ways, and the film never really makes a choice regarding what it wants to be.

Worse still, it grounds the two protagonists on stereotype: Virginia, as the self-flagellating, neurotic genius who never smiles; and Vita, the shallow, bubbly, girly, emotionally immature heartbreaker. All of this is bad enough, but the worst, for me, was the fact that the film closeted a deeply nuanced, queer love relationship into the conventional formula of heteronormative romance. Once again, I have to cringe at the film’s reliance on cliché – not only at the level of character depiction or plot development, but also, more deeply, at the symbolic level: once again, we are faced with a film that cannot conceive of the fact that queer relationships can be joyful rather than suicidal or death-inducing.

In short, for an adaptation heavily based on the letters between the two, this film clumsily misses their spirit: their mundanity, their silliness, their playfulness, their wit, their shared jokes, their sheer joy.

6 thoughts on “Is it ever wrong to do what you want to?”