Irony is your plaything in Diary of a Provincial Lady (1930), to the point where it starts to be slightly subversive. Written as a series of diary entries, the book chronicles the trials and tribulations of our narrator, the eponymous provincial lady, over the course of one year, as she struggles to deal with her grumpy, monosyllabic husband Robert; her not quite well-behaved children, Vicki and Robin; and a household staff which is always on the verge of quitting. To make matters more complicated, our provincial lady is never able to live within her means and is constantly short of money, struggling to balance her financial situation (mostly without success) with frequent visits to the local pawnbroker and to her banker. 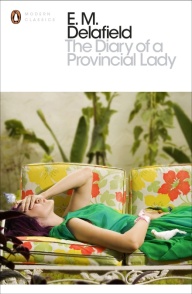 Her husband, apparently completely oblivious to her trials, is more intent on falling asleep behind his newspaper than on paying attention to what our provincial lady has to say. To complete the picture around our protagonist, we have a string of remarkably funny characters: Our Vicar’s Wife who is always paying unwanted visits, which are prolonged by her inability to leave; the Cook who, much against our protagonist’s will (and with a subtlety which dangerously borders on blackmail), always has the final word in household matters; the temperamental Mademoiselle, Vicki’s French governess; Old Mrs. Blenkinsop, an old villager who pictures herself to be always on the verge of death, and her daughter Barbara, a woman almost blackmailed into spinsterhood by her mother; Robert’s employer, Lady B., whom our narrator is constantly trying to impress (and invariably failing to). “Find myself indulging in rather melodramatic fantasy of Bentley crashing into enormous motor-bus and being splintered to atoms. Permit chauffeur to escape unharmed, but fate of Lady B. left uncertain, owing to ineradicable impression of earliest childhood to the effect that It is Wicked to wish for the Death of Another. Do not consider, however, that severe injuries, with possible disfigurement, come under this law – but entire topic unprofitable, and had better be dismissed.”

All characters seem to be indulging in random combinations of deceit, spite, self-delusion, repressed homicidal impulses, nonsense, and fast-spreading gossip. “Cook merely repeats that It Is All Over the Village, and that Miss Barbara will quite as like not be married by special licence, and old Mrs. B. is in such a way as never was. Am disconcerted to find that Cook and I have been talking our heads off for the better part of forty minutes before I remember that gossip is both undignified and undesirable.”

One interesting feature of your book is the fact that, in your protagonist, you manage to combine both a generic type and an individual character. Our nameless provincial lady is both a generic everywoman, to whom many of the readers can relate, even if they don’t live in a village in the UK in the first half of the twentieth century; and, at the same time, she is a very particular woman, whose voice sounds unmistakable from the very first page.

Part of the fun of this book lies in the fact that our provincial lady seems to be constantly trying to make us believe that she fits a very recognizable stereotype – and then constantly falling short of it.

Our provincial lady is constantly trying to keep up appearances and to pursue an ideal standard of living from which she is always doomed to fall short. She excels when she tries to talk about things she has no knowledge about: books she has not read (and doesn’t really intend to); books she did read but didn’t understand; places she has no money to travel to; exhibitions she would prefer not to visit. The fun is in the ever-widening gap between what she really wants (to spend her time shopping for clothes she cannot afford, for instance) and what she thinks others think she should want (to go to the Italian exhibition, for example). We are never quite sure whether our protagonist is really aware of the fact that her ideal standards exist only in her (slightly twisted) head.

I am almost tempted to think that yours is a subversive sense of humour, and that you use comedy both ways: to carry a disruptive feminist meaning; and, at the same time, to distract the reader from such meaning. Can one subvert the clash between domestic and feminist fiction? You seem to be saying that there is no point in asking: let them clash, and then there is laughter.

“Receive a letter from Mary K. with postscript: Is it true that Barbara Blenkinsop is engaged to be married? and am also asked the same question by Lady B., who looks in on her way to some ducal function on the other side of the county. Have no time in which to enjoy being in the superior position of bestowing information, as Lady B. at once adds that she always advises girls to marry, no matter what the man is like, as any husband is better than none, and there are not nearly enough to go round.
I immediately refer to Rose’s collection of distinguished Feminists, giving her to understand that I know them all well and intimately, and have frequently discussed the subject with them. Lady B. waves her hand – (in elegant white kid, new, not cleaned) – and declares That may be all very well, but if they could have got husbands they wouldn’t be Feminists. I instantly assert that all have had husbands, and some two or three. This may or may not be true, but have seldom known stronger homicidal impulse. Final straw is added when Lady B. amiably observes that I, at least, have nothing to complain of, as she always thinks Robert such a safe, respectable husband for any woman. Give her briefly to understand that Robert is in reality a compound of Don Juan, the Marquis de Sade, and Dr. Crippen, but that we do not care to let it be known locally. Cannot say whether she is or is not impressed by this, as she declares herself obliged to go, because ducal function “cannot begin without her”. All I can think of is to retort that Duchesses – (of whom, in actual fact, I do not know any) – always remind me of Alice in Wonderland, as do white kid gloves of the White Rabbit. Lady B. replies that I am always so well-read, and car moves off leaving her with, as usual, the last word” – E. M. Delafield, Diary of a Provincial Lady

“July 3rd.–Breakfast enlivened by letter from dear Rose written at, apparently, earthly paradise of blue sea and red rocks, on South Coast of France.  She says that she is having complete rest, and enjoying congenial society of charming group of friends, and makes unprecedented suggestion that I should join her for a fortnight.  I am moved to exclaim–perhaps rather thoughtlessly–that the most wonderful thing in the world must be to be a childless widow–but this is met by unsympathetic silence from Robert, which recalls me to myself, and impels me to say that that isn’t in the least what I meant. (Mem.: Should often be very, very sorry to explain exactly what it is that I do mean, and am in fact conscious of deliberately avoiding self-analysis on many occasions.  Do not propose, however, to go into this now or at any other time.)” – E. M. Delafield, Diary of a Provincial Lady

“Am asked what I think of Harriet Hume but am unable to say, as I have not read it. Have a depressed feeling that this is going to be another case of Orlando about which was perfectly able to talk most intelligently until I read it, and found myself unfortunately unable to understand any of it.” – E.M. Delafield, Diary of a Provincial Lady