In Belinda (first published in 1801, revised in 1810), we can almost feel the double-edged sword you are playing with: while championing the idea that women are able to make reasoned choices and, thus, to exercise freedom, you also seem to be making a strong case for the idea that women can only be free by renouncing the public sphere and by embracing the private, personal freedom to follow their own individual conscience when dealing with domestic affairs.

Our protagonist, Belinda, is a seventeen-year-old orphan girl, who is sent to London, to live with Lady Delacour, a fashionable society hostess. Belinda’s aunt, Mrs. Stanhope, who has a reputation as a manipulative fortune-hunter and matchmaker, has ingratiated herself with the Lady, in the hopes of finding a good husband for Belinda.

At first, our protagonist feels dazzled by the glamour of Lady’s Delacour world, but she soon finds out that, behind her chaperone’s bright public persona, there is a deeply unhappy woman: constantly fighting with her dissolute husband, the Lady seems to be solely concerned with her popularity in London’s high circles. Estranged from her daughter, she wastes her time drifting in a world permeated by intrigue, fierce competition, frivolity, and nonsense. Belinda realizes that Lady Delacour may not be a good role model for her at all, and becomes disgusted by the manipulations needed to keep this shallow world spinning around her.

To make matters worse, Lady Delacour may be dying of a cancerous breast wound, a secret that she keeps from everyone, except her maid, Marriott, and Belinda. Although she feels to be wasting her life for nothing, Lady Delacour is determined to keep up her lively persona and to continue her public appearances for as long as possible, even if she needs to pay with her health and, ultimately, with her life.

Our protagonist, however, manages to cut through the Lady’s pretences, and is the first person to offer true friendship to her. We follow them as Belinda tries to reform Lady Delacour’s ways, falls in love, is courted by a group of fine (and not so fine) eligible men, falls victim of intrigue, and collects a good number of friends and enemies.

Belinda and Mr Hervey from version 1896 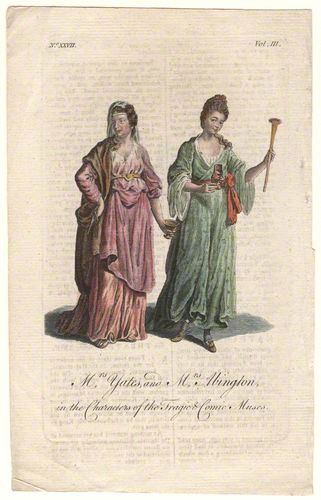 There is a nice pace to the story, and the chapters usually end in cliff-hangers, enticing us to move forward through a series of misunderstandings, false assumptions, and domestic intrigue. One of the shortcomings of the book, however, is the fact that, to make your message come across, you treat most of the characters as stereotypes: Mr. Vincent, a Creole and heir to West Indian wealth, is a gambler; Harriet Freke, the so-called masculine woman, is a parody of feminism; Juba, the black servant, is portrayed as a bon sauvage, naïve and loyal; Solomon, the Jew, is a usurer.

In its first (1801) and second (1802) editions, the novel touches on the (at the time controversial) topic of interracial marriage between African, Creole and English characters: Juba, an African servant on Mr. Vincent’s plantation in Jamaica, marries Lucy, an English farm-girl; Belinda gets engaged to a rich West Indian Creole. The third edition of the novel, however, published in 1810, altered these sections, so that the book could be included in a series defining the British novel. Some also argue that you made these changes at the insistence of your father…

Be that as it may, the heart of the book lies elsewhere: here we have the story of a girl growing into a self-confident woman, learning from the mistakes of others, and daring to think for herself and to depend on her own judgement, even when this means taking the risk of swimming against the tide.

In many respects, yours is a conventional novel of its time, charting the struggles of a girl in search of a good marriage – which, in turn, is portrayed as the only respectable occupation for women. The novel distinguishes itself, however, in its portrayal of women as capable of rational thought and self-control, as well as in its mild progressivism: by combining virtue and independent thought, Belinda is a character who is frequently refusing to submit to the authority of others; focusing on developing her own moral compass and good sense, she gradually grows to become the figure whom everyone depends upon. She makes her own decisions and takes full responsibility for her choices.

In Lady Delacour and Belinda, we also have a nuanced portrayal of female friendship that escapes the common stereotypes of competition and betrayal. The duo also embodies the conflict between reason and emotion, as well as between individual freedom and the bounds of society: while Belinda advocates for rational love and duty, Lady Delacour champions passion and freedom. However, the idea of freedom in the face of society’s restraints is to be taken with a grain of salt here: while it is true that Lady Delacour, by claiming that love is not bound by reason, is a free spirit in the matters of the heart; it is also true that, at the same time, by wanting to be admired and to keep a public persona, she enjoys less freedom than Belinda when it comes to making her own personal choices.

Belinda is in constant flux between the two extremes represented by Lady Anne Percival – a chaste, modest, motherly woman, the embodiment of domestic bliss, but devoid of passion – and Lady Delacour – the extravagant, dissipated aristocrat, who is nonetheless true to her heart and fervent in her affections, be those good or bad.

Furthermore, Belinda’s coming of age journey is contraposed to that of two other extremes: Harriet Freke – the outrageous crossdresser, who proclaims women’s superiority to men and even dares to influence politics – and Virginia St. Pierre – an orphan brought up by one of Belinda’s suitors to be a perfect wife, a woman kept as a ‘child of nature’ unspoiled by education and culture. By contrasting Belinda with those two seemingly opposite figures, you seem to be making a strong case for female education: both Harriet and Virginia are uneducated women who, left to their own devices, almost lead to disaster; Virginia is spoiled by her lack of experience in the outside world, as well as by the unregulated reading of romance novels; Harriet, on the other hand, has plenty of experience, but lacks disciplined education, and, as a parody of the late eighteenth-century image of a feminist, shuns reading in favour of mimicking empty slogans.

Differently from Virginia, Belinda educates her mind through the reading of moral philosophy (not novels), and she also benefits from her experience outside the domestic realm, when exposed to the social circles of Lady Delacour. Also differently from Harriet, Belinda advocates for education as a means of enlightenment, but also dismisses other activities traditionally gendered as male as neither worthy nor appropriate for a woman.

More than Belinda’s coming of age, for me, this is a novel about Lady Delacour’s domestication: the real character development here is that of our Lady, who, marked by a physical wound as a kind of punishment for her hubris and the embodiment of her moral deficiency, gradually learns to reform her ways. And the strength of the novel, for me, lies precisely in the fact that her domestication is not entirely successful. Lady Delacour, like a force of nature, is never completely contained: if it is true that she gives up her life in the public sphere in favour of a stronger domestic role, it is also true that she manages to keep her place at the central stage; rather than a master, she makes a partner of her husband.

As a proof that she never erases her fervent subjectivity, nor accepts a passive role, but manages to keep her independent spirit, you offer us the somewhat postmodern ending, where Lady Delacour orchestrates the closing of the novel, as if she had been its author all along. “Shall I finish the novel for you?”, she asks – and this subtle transgression reads like the perfect emblem of the act of writing: a quick trespassing into the public sphere, by which you, pressed by the threat of a double-edged sword, manage to subtly challenge the very code of propriety that you appear to be advocating in the book.

“My actions, the whole course of my future life, shall show that I am not quite a brute. Even brutes are won by kindness. Observe, my lord,’ continued she, smiling, ‘I said won, not tamed! A tame Lady Delacour would be a sorry animal, not worth looking at.'” – Maria Edgeworth, Belinda

“But have a care – you cannot live in armour all your life – lay it aside but for a moment, and the little bold urchin will make it his prize. Remember Raphael’s picture of Cupid creeping into the armour of the conqueror of the world.” – Maria Edgeworth, Belinda

“‘Have you a heart?’ ‘I hope so’ ‘And it can exist without love? I now understand what was once said to me by a foolish lordling: “Of what use is the sun to the dial?” – Maria Edgeworth, Belinda

3 thoughts on “You cannot live in armour all your life”