Cassandra at the Wedding (1962) is a nuanced, finely observed character study and comedy of manners, full of a dark, twisted sense of humour, which can also be very tender and subtle at times – almost like a Wes Anderson’s movie. 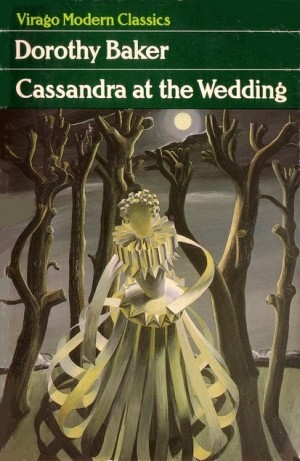 When the novel opens, Cassandra Edwards, a twenty-something graduate student, is alone at her apartment in Berkeley, musing over her thesis on French female writers, while looking out at the Golden Gate Bridge and – possibly – contemplating suicide. She and her twin sister, Judith, used to share the apartment and were inseparable, but Judith has been living in New York for nine months now, where she is studying music at Julliard. Feeling that the two of them formed a self-sufficient unit, Cassandra is not coping well with the distance – and, to make matters worse, Judith is about to get married.

As Cassie is driving back to her family ranch, we already feel that there is something deeply amiss with her and her family: her father is a retired philosophy professor, and possibly an alcoholic; her mother, a famous writer, died some years ago but remains as a looming presence throughout the novel; Cassie’s grandmother is a distinguished lady with a penchant for keeping up appearances; Judith is intent on getting free from the life she had with her sister; and Cassie is determined to sabotage her twin sister’s wedding.

The book is structured in three parts, and Cassandra’s voice opens and closes the story, with a brief interlude in the middle, which is narrated by her sister. This structure not only represents the emotional dynamics between the twins, enhancing our understanding of their power games and of their different but complementary voices, but also mirrors Cassandra’s own emotional journey and her struggles to cope with the changes at hand.

I particularly love the way the novel threads the fine line between biting humour and despair. So as to counter the feeling of losing her sister because of the wedding, Cassandra decides to strike back by getting married to death, embracing it like a “bolt of black velvet”, to become whole again in this nothingness. So, in Judith’s wedding night, her husband, who is a medical doctor, has to spend the entire night performing artificial respiration on a naked woman who looks just like his wife. Everything is falling apart, everyone in the family seems to be on the brink of a breakdown – and the most disturbing thing is that there is something terribly funny about it all.

This is very much a book about identity – and the struggle that comes with trying to define oneself. We sense not only Cassandra’s conflicted relationship with her queerness, but also her struggle to claim her own identity as a writer and to free herself from comparisons to her mother. However, while those conflicts are referred to only obliquely, Cassie’s quest to define herself in relation to her twin sister is the struggle that really takes up central stage in the novel.

As a pair, Cassie and Judith have always acted as a self-contained unit: they needed no one but themselves (“we can start living where other imaginations fail”). When they were growing up, the twins were encouraged to develop their own individualities, but only now Cassie realizes that they have always developed their identities in relation to each other: both she and her sister seem to have acted as if they were half a person and could only be whole together. Now that Judith has moved on, Cassandra is losing the sense of her own identity, and considers her sister’s decision as a kind of amputation.

Uncapable to cope with the demise of her childhood world, she insists on trying to reassemble its pieces and glue them back together. Outraged that her sister has been able to outgrow their childhood bubble and to create an independent life, Cassandra has lost both a mirror and a part of herself. She feels as though she were about to be discarded, and muses that she might as well discard herself in a more radical way. However, rather than the loss of a whole, her desperate yearning to reunite herself with her other half represents the loss of her illusion of a whole: and, like all breakdowns of illusion, it teaches her something about love.

As a narrator, Cassie seems to be as manipulative and charismatic as she is as a sister: much like Judith, we cannot help but to fall under her sway. We begin and end with her voice – at once disturbing, funny, manipulative, reckless, self-absorbed, erratic, delusional, clever, full of contradictions, and thoroughly unreliable.

We also begin and end with Cassie contemplating a bridge: she has come full circle, and yet we are not exactly at the same point we started from. If, at the beginning, Cassandra was considering to jump, by the end she decides to make things even simpler: she takes off what had been annoying her, throws it away, and moves on. Nothing has changed, and yet everything is different.

“By a firm act of will I forced the face between the shelves to stop becoming Judith’s and become mine. My very own face – the face of a nice girl preparing to be a teacher, writing a thesis, being kind to her grandmother, going home a day early instead of a day late or the day I said, and bringing something decent to wear. But it can give me a turn, that face, any time I happen to catch it in a mirror; most particularly at times like this when I’m alone and have to admit it’s really mine because there’s no one else to accuse.” – Dorothy Baker, Cassandra at the wedding