My Year of Rest and Relaxation (2018) seems to be a novel suffering from split personality: on the one hand, it is a book about a woman who, in an attempt of self-erasure, resigns herself to becoming her own blank canvas (and, ultimately, her own art); on the other, however, the book itself, in its sharp dismissal of its own protagonist, is the one doing the act of self-erasure, like some kind of self-destructing art work.

The story centres on the unnamed narrator, a 24-year-old woman who decides to go into hibernation. It’s the year 2000 and we are in New York. Both of her parents have died while she was in college, and she has just been fired from her job at an art gallery in Chelsea, where she had started working as a receptionist after her graduation from Columbia University. Our narrator is living off her parent’s money, on the Upper East Side, in an apartment she bought with her inheritance. 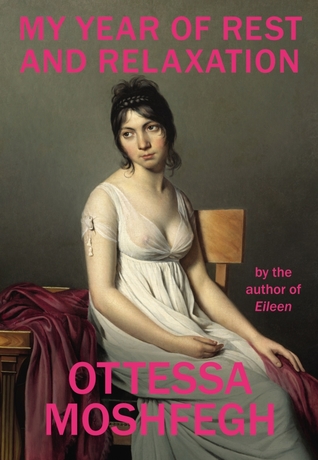 Having found a quack psychiatrist on the phone book, she indulges herself in ever more prolonged periods of sleep, with the help of an array of pills supplied to her by her doctor. “Sleep felt productive”, she says. As our protagonist sleeps away her days, she begins to experience strange blackouts, where she even sleepwalks through the city, only to wake up later and find out that she has gone dancing, rearranged her furniture, or bought useless stuff online. “This was the beauty of sleep—reality detached itself and appeared in my mind as casually as a movie or a dream.”

We are tempted to read her hibernation as a result of her suffering over her parents’ recent deaths. However, this idea is soon overcome, when we find out how distant and cold her family dynamics was. Recalling her mother, our protagonist cannot help but see her with some disdain: “I remembered watching her ‘put her face on,’ as she called it, and wondering if one day I’d be like her, a beautiful fish in a man-made pool, circling and circling, surviving the tedium only because my memory can contain what is imprinted on the last few minutes of my life, constantly forgetting my thoughts.”

Our protagonist also lacks meaningful emotional ties, and seems to be unable to empathise with anyone. Her abusive boyfriend has recently broken up with her, and her loneliness is interrupted only by regular visits from Reva, a former college acquaintance she despises. “‘I wanted to be an artist, but I had no talent,’ I told her. ’Do you really need talent?’ That might have been the smartest thing Reva ever said to me.”

Our narrator soon comes to the conclusion that her life would be better, if she completely retreated from the world and slept all the time. Her aim is not as much to sedate unbearable feelings (she does not seem to have any), but to sedate the world outside, a world which she cannot help but hate. “I thought life would be more tolerable if my brain were slower to condemn the world around me.” Gradually, her hibernation becomes a kind of art project: to “disappear completely, then reappear in some new form”, as if coming out to the other side in a new form, cleansed, and empty. Like a blank canvas.

Our narrator may have abandoned long ago her ambitions to be an artist (if there ever were any ambitions), but she slowly wakes up to the possibility of becoming her own art experiment. She then turns her life over to an artist she had met from her work in the gallery, and they agree that she’ll be drugged, locked up in her apartment for four months, while he films her as she sleeps (and sleepwalks). In exchange for the ‘material’, he must feed her and provide her with anything she needs. Her mission – as she calls it – is to purge her mind, remaking her own self. If she truly achieves that, it is questionable, but she definitely transforms herself into some kind of art piece.

I confess that I appreciate the book more for what it has tried to do, than for what it has actually managed to achieve. I have the strong feeling that it would have fared better, if it had been a short-story, instead of a novel. As it is, the book keeps circling around itself, like an idea in search of a way out. It reads as if there were something dormant in it; we wait and wait for a wake-up call that never really happens.

Our protagonist turns herself into the best personification of the culture of individualistic sleepwalkers she most despises. By proclaiming her ‘I’d prefer not to’, she turns herself precisely into that which she most scorns; and she becomes an accomplice of her own objectification. She becomes a strange mixture of Oblomov and Sleeping Beauty, with a touch of Bartleby, for her refusal to incorporate the American ideal – personified in Reva – of a self-made woman who prospers through hard work. Our protagonist simply turns her back to all that, and, rather than a self-made person, she chooses to be more like a self-made half-living object.

“Sleep felt productive. Something was getting sorted out. I knew in my heart—this was, perhaps, the only thing my heart knew back then—that when I’d slept enough, I’d be okay. I’d be renewed, reborn. I would be a whole new person, every one of my cells regenerated enough times that the old cells were just distant, foggy memories. My past life would be but a dream, and I could start over without regrets, bolstered by the bliss and serenity that I would have accumulated in my year of rest and relaxation.” ― Ottessa Moshfegh, My Year of Rest and Relaxation

2 thoughts on “My past life would be but a dream,”