Pilgrimage is a sequence of thirteen semi-autobiographical novels, published between 1915 and 1967, following the life of our protagonist, Miriam Henderson, rendered as a collection of incidents in her personal pilgrimage toward her innermost self. 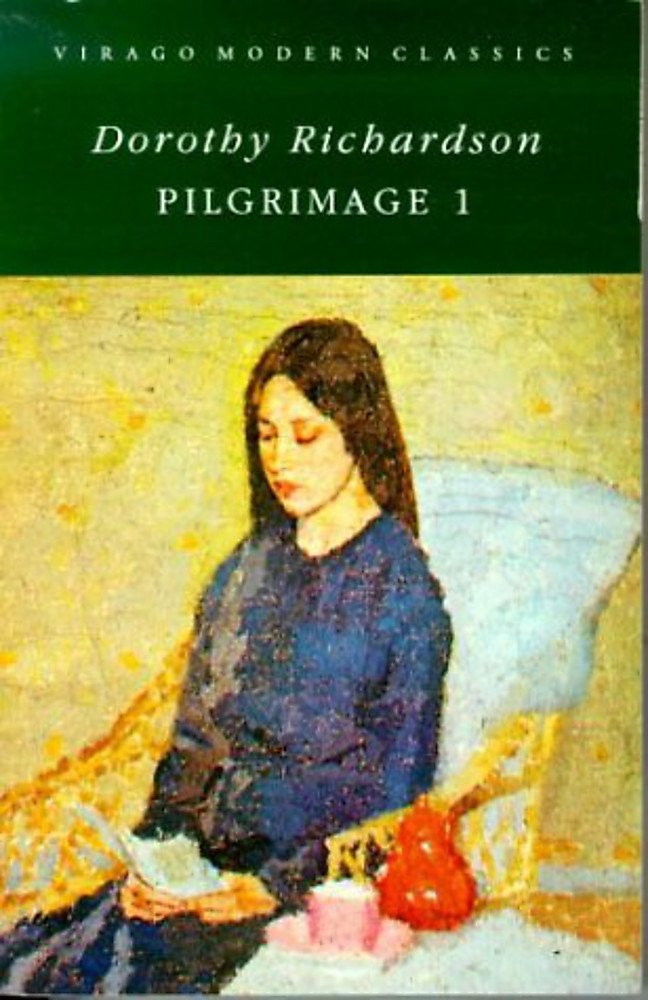 When the story begins, in Pointed Roofs (1915), Miriam is feeling nervous and full of doubts about an impeding travel to Germany. It’s the early 1890’s, and she is seventeen years old, barely out of school. Her family has fallen on hard times due to her father’s bankruptcy, and Miriam has just accepted a position as an English teacher at a girls’ finishing school in Hanover. As we follow her through her journey and, afterwards, as she settles into her new routine, we soon find out that her misgivings had been in vain: despite having no formal training to teach, Miriam is more than prepared for her first job.

Differently from her more rigorous, academic curriculum in England, the girls at the boarding school, barely younger than Miriam herself, lack a fixed daily schedule: their activities include mostly outings and idle hours, sprinkled in-between by sporadic music lessons, sewing classes, some instruction in English and French, and religious activities. Those girls, Miriam soon concludes, are being prepared to be wives, rather than independent women with careers of their own.

As we follow Miriam during the four months she stays in Hanover (from whose houses with pointed roofs you took this volume’s title), your focus seems to be centred on her relationships to her students, to her colleagues and to the school’s supervisor, Fräulein Pfaff. At this stage, Miriam is still very self-conscious and shy: to her, every form of social contact is an ordeal, and music seems to be her only solace in this strange environment. Her story, in this volume, is punctuated by references to Don Giovanni, Chopin nocturnes, Lohengrin, the Beethoven sonatas, and Mendelsohn’s Spring Song, among others. As the volume ends, she is boarding a train to return to England, and seems to be overcome by a sense of defeat.

We then embark on the second volume, Backwater (1916), when Miriam assumes a position to work as a resident teacher in a North London private school. Those are months of loneliness, anger, and struggle for our protagonist: she hates the neighbourhood, and loathes her employers. She doesn’t think much of her pupils, and she resents having to spend her time in this school.

While on a walk, Miriam finds a circulating library in the neighbourhood, from where she then starts to borrow books to read whenever she has some free time. If music had been her solace in Pointed Roofs (1915), now it is literature that plays this role in her life. Her story, in this volume, is full of references to Victorian novels popular at that time: from Cometh Up As A Flower, by Rhoda Broughton, Not Like Other Girls, by Rosa Nouchette Carey, and The Heir of Redclyffe, by Charlotte Mary Younge, Miriam goes on to borrow Ouida’s risqué novels, which fascinate her for, among other reasons,  their lack of sermonizing.

Driven to resign from the school, Miriam takes, in the following volume, Honeycomb (1917), a new position as a governess for the two children of a successful lawyer, Mr. Corrie, in a large villa outside London. It soon turns out that her pupils are spoiled and lazy. With very little to do but an hour or two of superficial teaching, Miriam feels bored. To make matters worse, she starts to feel a growing contempt for Mr. Corrie’s wife, a superficial woman with no real occupation, and for the couple’s circle of friends, whom Miriam cannot help but find philistine. She also starts to develop a certain contempt for the way men in general acted toward women: “Men ought to be horse-whipped, all the grown men, all who have ever had that self-satisfied smile, all, all, horse-whipped until they apologize on their knees.”

Her main solace continues to be reading, and she begins to reflect about what leads her to books: “That was why Ouida put those others in the shade, not, not, not because her books were improper. It was her, herself somehow. Then you read books to find the author! That was it. That was the difference (…) I have just discovered that I don’t read books for the story, but as a psychological study of the author (…) It was rather awful and strange. It meant never being able to agree with people about books, never liking them for the same reasons as other people (…).”

Throughout this volume, Miriam finds yet another source of solace: London itself, as she discovers that she loves to take walks in the city: “Life streamed up from the close dense stone. With every footstep she felt she could fly.” Her love for reading and walking leads Miriam to reflect on truth and perspective: she senses that there are many sides to every question, or even “no question, only sides… always changing”, and that “perhaps a judgement can never be true.”

It is here that Miriam first defines herself as a ‘new woman’, and starts to repel bourgeois married life, seeing Mrs. Corrie as a prisoner of her marriage: a bright beautiful bird, “fading slowly year by year in the stifling atmosphere, the hard brutal laughing complacent atmosphere of men’s minds…”

In this spirit, Miriam eventually returns home to attend the wedding of her sisters Sarah and Harriet. Later, to help against her mother’s depression, Miriam takes her to the seaside. One day, on her return to the lodging, she witnesses her mother’s death, in what may have been a suicide. As the volume ends, our protagonist is alone, and crying “tears with no salt”.

I am only at the beginning of Miriam’s long journey, but I already feel a slight development in the way you use the ‘stream of consciousness’ technique: it feels as if, the more Miriam matures, the denser her interior monologues become – which, in turn, mirror her constant movement of getting ever so closer to herself.

It is not like we are plunging into Miriam’s mind, in a solipsistic journey; on the contrary, it feels like her mind is becoming ever more connected with the world outside. It feels like we are shown how she experiences her world, as if she were growing inside out, embedded in it: “still again, the sight of the spring flowing from her eyes, into them, out through them, breathing with her breath, the feeling of spring in the soft beating from head to foot of her blood, was all there was, anywhere, out to the limits of space.”

The narrative, in these three volumes, although realistic and straightforward, is rendered through our protagonist’s perspective, in a hybrid of traditional third-person narration and interior monologue, and the latter becomes more impressionistic as we approach the third volume. I wonder whether this pattern will hold for the next volumes. Likewise, I am curious to know whether the following books in the series will explore the questions you (and young Miriam…) started to raise, in the first three volumes, about women’s education and independence in the male-dominated world of the 1890’s.

“Things we astounding enough; enough to make you die of astonishment, if you did nothing at all. Being alive. If one could realize that clearly enough, one would die. Everyhing every one did was just a distraction from astonishment.” – Honeycomb, Dorothy Richardson

“Her cheeks felt hollow, her feet heavy. She summoned her strenght, but her body seemed outside her, empty, pacing forward in a world full of perfect unanswering silence.” – Honeycomb, Dorothy Richardson

“She knows she is alive and that there is no escape from being alive. But it has never made her feel breathless with joy. She laughs all day, at everybody and everything, and at night when she is naked and alone she moans; moan, moan, moan, heart-broken; wind and rain alone in the dark in a great open space.” – Backwater, Dorothy Richardson

“Listening to sermons was wrong… people ought to refuse to be preached at by these men. Trying to listen to them made her more furious than anything she could think of, more base in submitting… those men’s sermons were worse than women’s smiles… just as insincere at any rate… and you could get away from the smiles, make it plain you did not agree and that things were not simple and settled… but you could not stop a sermon. It was so unfair. The service might be lovely, if you did not listen to the words; and then the man got up and went on and on from unsound premises until your brain was sick… droning on and on and getting more and more pleased with himself and emphatic… and nothing behind it.”  ― Dorothy M. Richardson, Pointed Roofs

12 thoughts on “Her body seemed outside her”