In your novel A View from the Harbour (1947), we are sea watchers, guided by a faint beam. It feels very much as if we were inside a lighthouse, following the light as it shifts from one character to another. 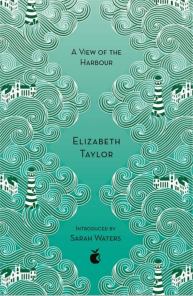 The novel centres around the inhabitants of a small seaside town in England in the aftermath of WWII.  Lily Wilson is a young war widow who lives alone above the local wax museum. She tries to assuage her desperate loneliness by borrowing novels from the library and spending her evenings in the local pub, drinking alone and looking for male company. Her neighbour, Tory Foyle, is a sophisticated woman, recently divorced, who is carrying on a secret affair with the town doctor, Robert – the husband of Tory’s best friend, Beth Cazabon.

Beth is a novelist working on her new book; trying to balance her art and her household duties, she is completely oblivious to what is happening next door. The same could not be said of her oldest daughter, the twenty-year-old Prudence, who becomes increasingly bitter against her father’s betrayal.

Mrs Bracey, a bedridden matriarch and town gossip, also picks up on the whole situation. Recently moved to the upstairs bedroom in her house, she has the best view of the harbour – and of her neighbours. She spends her days peering from her window and (unsuccessfully) asking her daughters for news of the world outside. “Up at her window, and in some discomfort (for her shoulder, her chest ached), Mrs. Bracey sat in judgment.  Guilt she saw, treachery and deceit and self-indulgence.  She did not see, as God might be expected to, their sensations of shame and horror, their compulsion towards one another, for which they dearly paid, nor in what danger they so helplessly stood, now, in middle-age, not in any safe harbour, but thrust out to sea with none of the brave equipment of youth to buoy them up, no romance, no delight.”

Mrs Bracey’s younger daughter, Iris, works in the local pub and spends her time dreaming to be swept away by a famous actor – someone like Laurence Olivier, for example. Iris has to share her bed with her older sister, the down-to-earth Maisie, who sometimes (guiltily) wishes their mother were dead, so that she can be finally free to have a life of her own.

Into this set of lonely people, comes Bertram Hemingway, an elderly sailor, now retired, who is intent on becoming a painter. However, neither the newcomer artist nor the novelist is able to capture the definitive view of the harbour here: both are too self-centred, too oblivious to everything happening around them. “You’ve no idea of what is real, and how real people think,” says Tory to Beth “Writers are ruined people.  As a person, you’re done for.  Everywhere you go, all you see and do, you are working up into something unreal, something to go on to paper (…) One day something will happen to you, as it has to me, that you can’t twist into anything at all, it will go on staying straight, and being itself, and you will have to be yourself and put up with it, and I promise you you’ll be a bloody old woman before you can make a novel out of that.”

As in the other novels I read by you, you make references to other books, in order to provide the reader with a key to the story you are trying to tell. Here, we have references to George Eliot’s Middlemarch, with a study of a provincial life (and the interplay between your Beth Cazabon and Eliot’s Edward Casaubon); and to Woolf’s To the Lighthouse, not only through the image of the lighthouse, but also through the exploration of the attempts to reconcile life and art. I love the parallelism with which you close the story: the book finishes when Beth finishes writing her own novel; and, as Beth loves writing about death scenes, we will also face a death here.

You throw a subtle light not only over the social prejudices faced by women novelists, but also over their inner struggles to reconcile their talent with what is demanded of them as women, wives and mothers. “‘A man,’ she thought suddenly, ‘would consider this a business outing. But, then, a man would not have to cook the meals for the day overnight, nor consign his child to a friend, nor leave half-done the ironing, nor forget the grocery order as I now discover I have forgotten it. The artfulness of men,’ she thought. ‘They implant in us, foster in us, instincts which it is to their advantage for us to have, and which, in the end, we feel shame at not possessing.’ She opened her eyes and glared with scorn at a middle-aged man reading a newspaper. ‘A man like that,’ she thought, ‘a worthless creature, yet so long has his kind lorded it that I (who, if only I could have been ruthless and single-minded about my work as men are, could have been a good writer) feel slightly guilty at not being back at the kitchen-sink.’”

Yours is a disillusioned depiction of art and artists: neither painting nor writing offer any special entry into life, and they come at the cost of blindness. If there is someone here with a privileged view of the harbour, it’s the reader. We are granted the sweeping view of everything lurking beneath this small seaside town: grief, prejudice, fear, longing, frustration, and, above all, loneliness. Everyone is pushing the others away through lies, false expectations, or wrong perceptions. If it is true that your characters share the view of the harbour they inhabit together, it is also true that this view comes back to them as if distorted by mirrors. “Seen from afar, the lighthouse merely struck deft blows at the darkness, but to anyone standing under the shelter of its whitewashed walls a deeper sense of mystery was invoked: the light remained longer, it seemed, and spread wider, indicating greater ranges of darkness and deeper wonders hidden in that darkness.”

As the point of view shifts from one character to another, only the reader can piece together a broader picture: if Mrs Bracey sees in Lily a whore, we can see her further, as a lonely, desperate young woman; if Beth sees Tory as a loyal friend, we are able to take that with a pinch of salt; if, on the other hand, Prudence sees Tory as a weak traitor, we can go further and perceive the latter’s longing for change.

If this is certainly a novel about a bunch o people watching the lives of one another, it is also a book about what this people cannot or do not want to see; as well as about the many ways in which their inability, delusion, or their refusal to see and be seen make them even more lonely.

However, despite our privileged perspective, by the end of the book, we will not get a final, definitive view of the inner struggles harboured by your characters. Like a wave turning over at sea and breaking on the shore, the beam of light that guides our view is fragile, tossed to and fro by the sea: we know it will eventually break in salt and foam, but we follow it with our eyes anyway.

“The most sensible thing to do to people you hate is to drink their brandy.”  ― Elizabeth Taylor, A View of the Harbour

“Interesting,’ he observed, ‘what two people can make of the same view. We all see places a bit different to what the next man does.” ― Elizabeth Taylor, A View of the Harbour

“There’s no summing-up, but a sense of incompleteness. After years of building up each unique personality, in the end there is no moment of putting lines beneath the sum and adding up to see what it all amounts too.” ― Elizabeth Taylor, A View of the Harbour