The Enemy’s Cosmetique (Cosmétique de l’ennemi, 2001, not translated into English yet) reads like an ouroboros, a snail swallowing its own tail: in a sequence of increasing macabre tales, the two characters are brought into their innermost self, caught in a sadistic kind of seduction game: the interplay between guilt and punishment. 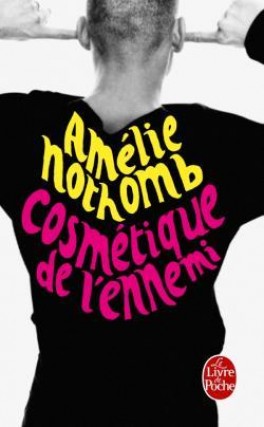 The story is set at an airport terminal: Jérôme Angust, a forty-something man on a business trip, is annoyed at the fact that his flight has a two-hour delay. Things become even more annoying, when he is approached by a peculiar man: Textor Texel, a random guy from Holland, who seems to be intent on preventing Jérôme from reading his book in peace. Despite the many cues dropped by Angust that he is not in the least interested in engaging in a conversation, Textor – as the meaning of his name suggests, a ‘word-weaver’ – simply won’t take no for an answer. As Texel explains, he always does exactly what he wants.

The book is entirely structured as a dialogue between those two men. At first, it sounds like a familiar situation: Texel seems a sad but harmless fellow, one of those lonely strangers desperately seeking company with some banal tale or another. Many of us readers will be familiar with his kind: we are there trying to concentrate on our books, and suddenly we are approached by a random stranger eager to engage our attention.

But then, the story starts to take a creepier nature. The Dutch guy just won’t go away, follows Angust around the terminal, and insists on talking to him at all costs. Texel begins by telling a story from his childhood. He had been a lonely child, raised by his grandmother. Eager to belong among his group of classmates, he had always been envious of the most popular boy, Franck. So much so, that, one night, little Texel fervently prays to God to kill Franck. The next morning, the children are told that, during the night, Franck had died unexpectedly of cardiac arrest. Since then, Texel tells Angust, he is convinced that he had murdered his classmate – remotely, and by praying.

At this point, we can already tell that the Dutch guy is not right in the head, right? But he goes on with his increasingly bizarre tale. When Texel was twelve years old, his grandparents gave him the task of feeding the cats. He felt disgusted by the cat food and had to close his eyes while serving it. One day, little Textor couldn’t stand it anymore: even though feeling nauseated, he forced himself to eat all of the cat food in front of the poor hungry animals.

If at first Angust was not particularly impressed by Textor’s stories, by now he is already hooked. Slowly, the dialogue takes on a darker shade, bordering on the macabre. When we least expect, we find ourselves in the midst of a strange, wryly humorous, psychological thriller. The ping pong between Angust and Texel, marked by cynicism and sarcasm, surely makes us laugh – but it is a nervous laugh all the way down.

What inadvertently starts as a kind of bizarre therapy session soon becomes a confession of guilt. It turns out that Texel’s account of his crime does not only include killing a classmate in his imagination and depriving the cats of their food, but also assaulting and raping an unknown woman in the Montmartre Cemetery in Paris; then compulsively searching the city for this same woman; and ultimately murdering her in her own apartment ten years later. And, even though this is the truth of the story, we will find later that this is not exactly the true story.

Texel is not only a tortured fellow, he is also the one doing all the torturing. And Angust (does his surname refer to angoisse/ anguish?) is not alone in the role of victim: we, as readers, are made captives of Textor’s weaving of words and his macabre tales. Texel explains that, in the place of God or Devil, he believes rather in the power of the ‘inner enemy’: one’s personal nemesis, a dark figure who lives inside everyone, even if mostly repressed. He explains further, that he has always been haunted by his enemy within: “I believe in the enemy because, all the days and all the nights, I encounter him on my path. The enemy is the one who, from within, destroys everything that has any value”.

The dialogue slowly assumes a tone of a game where the roles of the seducer (Textor) and the seduced (Angust and us) start to change place. Wrapping his tale with a “cosmétique” of evil (“the supreme moral which determines the world”), Textor draws us into the conversation, lulls us into letting down our guard, and ensnares Angust and us in this “cosmétique”, a slow process of seduction by words. Angust is led to evil by evil in his final downfall.

Moreover, Textor is positively convinced that he is Angust’s hidden inner enemy: he is the part that had been repressed, the part that for now on will only do what it wants. “One gets the criminals one deserves.” From the role of a seducer ensnaring a victim into sin, Textor reverts into the role of Angust’s inner conscience, a kind of sinister angel of salvation. Textor not only wants to torture, he longs for that which only love can provide: the ultimate role-swap – that is, reciprocity.

“Without wanting to, I have committed the perfect crime: nobody saw me coming, except for the victim. The proof, I am still free.” – Amelie Nothomb, Cosmétique de l’ennemi

The most disgusting thing about you is that you also put forward intellectual motives for your miserable sadistic behavior. – Amelie Nothomb, Cosmétique de l’ennemi