It takes us only a few paragraphs of Autumn (2016) to recognize your characteristic marks: experimental writing; a collage of literary references; a narrative propelled through voice and voice alone; a narrative that mingles past and present, as if they were one thing, happening at once; and, finally, the creative reframing of contemporary topics of discussion. However, compared to your other books, your new novel has a different atmosphere: uneasy, ripe with change; crisp like an Autumn afternoon; and fleeting, like our experience of time. There is a sense of seasons turning, and of decay; a sense of things morphing into something strange, and a sense of rebirth. 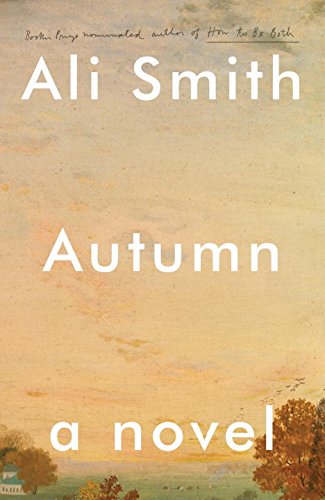 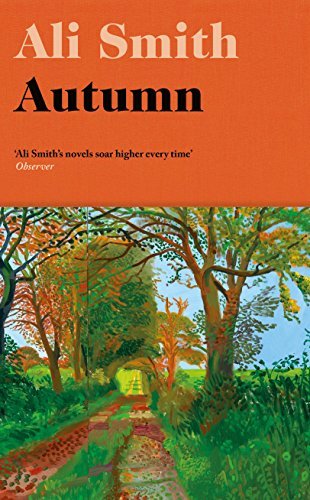 The novel opens with a misquote of Dickens’ A Tale of Two Cities (“It was the worst of times, it was the worst of times”) and a nod to Achebe’s Things Fall Apart (“Things. They fall apart.”). We follow the stream of consciousness of a man who has been washed ashore naked, in what seems to be a reference to Shakespeare’s The Tempest. He wonders if he is dead, and is amazed to find out that his body is young again. “But pure joy! He’d forgotten what it feels like, to feel.” There seems to be a girl in the beach and, ashamed, he soon covers his body in a suit of leaves (very much like Adam in the Book of Genesis). But we feel that something is amiss here: the man seems to be dreaming, or stuck in limbo. Suddenly, the sun disappears, the girl is gone, and the beach is littered with washed-up corpses, lying amid holidaymakers under parasols – a reference, maybe, to the refugee crisis.

Like someone who is waking up from a dream, we shift to England just after the Brexit vote. The man we had been following is the 101-year-old Daniel Gluck, a German-Jew refugee who lived through the rise of fascism in Europe in the 1930s, and is now living in a care home. While he lies unconscious, a 32-year-old woman keeps vigil at his bedside. Elisabeth Demand is a contract junior lecturer in art history at a university in London, “living the dream, her mother says, and she is, if the dream means having no job security and almost everything being too expensive to do.” Elisabeth has known Daniel since she was a child, when she and her mother moved in next door to him. Following her parent’s divorce, the girl soon took to her elderly neighbour, who became her close friend and confidant, introduced her to art, and inspired in her the love of literature.

At Daniel’s bedside, Elisabeth remembers their friendship, reads to him from Brave New World, The Tempest, and Ovid’s Metamorphoses, and muses about the uneasy current times. The narrative goes back and forth, weaving together Elisabeth’s childhood and early adulthood, along with Daniel’s story. We learn that he lost his younger sister in the Holocaust, and later moved to England, where he became involved in the British pop-art and music scene.

The characters’ story is mingled with that of Pauline Boty, a 1960s British Pop Art artist whose work was largely forgotten after her early death, and was rediscovered in the 1990s. Influenced by Daniel, Elisabeth had written a dissertation on Boty (“There’s next to no critical material,” Elisabeth’s dissertation supervisor tells her in an attempt to dissuade her from writing about Boty. “That’s one of the reasons I think it’d be a particularly good thing to do,” Elisabeth counters”). Boty’s famous painting, Scandal 63, now considered lost, is a reference to the Profumo Affair, a scandal that, as much as the 2016 Brexit campaign, shook the public’s confidence in politics. 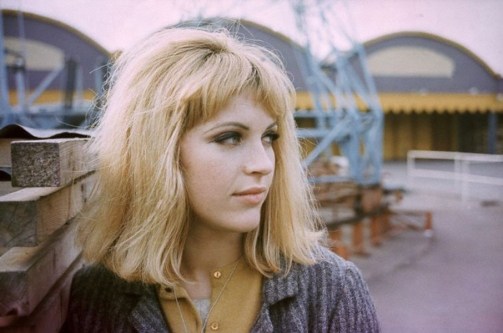 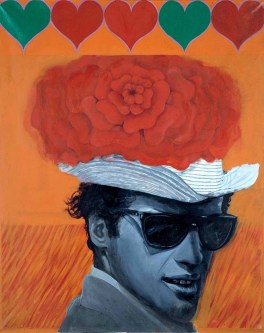 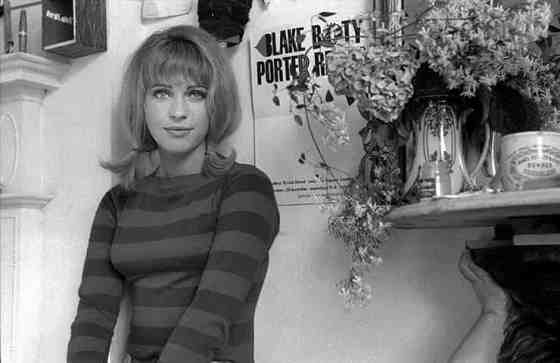 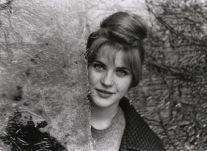 Your writing style mirrors Boty’s experimental collage techniques – a fragmented style that represents well the way we experience political news online nowadays (“Someone killed an MP, she tells Daniel’s back as she struggles to keep up. A man shot her dead and came at her with a knife. Like shooting her wouldn’t be enough. But it’s old news now. Once it would have been a year’s worth of news. But news right now is like a flock of speeded-up sheep running off the side of a cliff”). Furthermore, Boty’s story symbolizes the guiding principle of your book: the idea of transience, of things disappearing only to appear again later on. Boty is just another artist who was “(…) ignored. Lost. Rediscovered years later. Then ignored. Lost. Rediscovered again years later. Then ignored. Lost. Rediscovered ad infinitum.” As in a symphony of discarded things, “(…) the symphony of the sold and the discarded. The symphony of all the lives that had these things in them once. The symphony of worth and worthlessness.”

As the first novel in a planned seasonal quartet, Autumn is embedded in transience, memory and time, and in our experience of change. “Here’s an old story so new that it’s still in the middle of happening”. There are references to change as explored by other books: things suffering “a sea-change in to something rich and strange” (The Tempest); “bodies transformed in to shapes of a different kind” (Metamorphoses). Memory is compared to time travel: “We do it all the time. Moment to moment, minute to minute.”

The past – Daniel? – sleeps through the turmoil of the present, and comes only in distorted fragments (“But, of course, memory and responsibility are strangers. They’re foreign to each other. Memory always goes its own way quite regardless”). As memory retreats into dreamland, the collapse of consensus leaves a void: “It has become a time of people saying stuff to each other and none of it actually ever becoming dialogue.”

What I like about your book is the fact that you incorporate uneasiness and conflict for what they are. Instead of preaching, you just look more closely at the picture ahead, you retrace its inconsistences. “An image of an image means the image can be seen with new objectivity, with liberation from the original”, writes Elisabeth on her dissertation on Boty. That’s a powerful demand of literature and art: to look more closely. I am reminded of the ‘wide-open rose’ of the last scene, and the narrator who points out to the fact that it’s blooming still in the face of the upcoming winter: a thing with many seasons together all at once.

As in your other novels, literature and art (and the books themselves, images of images) are in Autumn fleeting attempts at empathy and mutual comprehension: they are ever-changing places of destroying and rebuilding; places of dissent merging into consensus and back again. Instead of stirring up division, you take a step back to retrace this continuous movement, and the lines where opposites meet. You insist that we remain along these lines, that we do not run away from this necessary and ever-changing place of meeting: the ‘wide-open rose’ right in front of us. “Look at the colour of it.”

“November again. It’s more winter than autumn. That’s not mist. It’s fog. The sycamore seeds hit the glass in the wind like – no, not like anything else, like sycamore seeds hitting window glass. There’ve been a couple of windy nights. The leaves are stuck to the ground with the wet. The ones on the paving are yellow and rotting, wanwood, leafmeal. One is so stuck that when it eventually peels away, its leafshape left behind, shadow of a leaf, will last on the pavement till next spring. The furniture in the garden is rusting. They’ve forgotten to put it away for the winter. The trees are revealing their structures. There’s the catch of fire in the air. All the souls are out marauding. But there are roses, there are still roses. In the damp and the cold, on a bush that looks done, there’s a wide-open rose, still. Look at the colour of it.”
― Ali Smith, Autumn

“October’s a blink of an eye. The apples weighing down the tree a minute ago are gone and the tree’s leaves are yellow and thinning. A frost has snapped millions of trees all across the country into brightness. The ones that aren’t evergreen are a combination of beautiful and tawdry, red orange gold the leaves, then brown, then down.

The days are unexpectedly mild. It doesn’t feel that far from summer, not really, if it weren’t for the underbite of the day, the lacy creep of the dark and damp at its edges, the plants calm in the folding themselves away, the beads of the condensation on the webstrings hung between things.

On the warm days it feels wrong, so many leaves falling.

But the nights are cool to cold.” ― Ali Smith, Autumn

“Rule Britannia, a bunch of thugs had been sing-shouting in the street at the weekend past Elisabeth’s flat. Britannia rules the waves. First we’ll get the Poles. And then we’ll get the Muslims. Then we’ll get the gyppos, then the gays. You lot are on the run and we’re coming after you, a right-wing spokesman had shouted at a female MP on a panel on Radio 4 earlier that same Saturday. The chair of the panel didn’t berate, or comment on, or even acknowledge the threat the man had just made. Instead, he gave the last word to the Tory MP on the panel, who used that final thirty seconds of the programme to talk about the real and disturbing cause for concern – not the blatant threat just made on the air by one person to another – of immigration. Elisabeth had been listening to the programme in the bath. She’d switched the radio off after it and wondered if she’d ever be able to listen to Radio 4 in any innocence ever again. Her ears had undergone a sea-change. Or the world had.” ― Ali Smith, Autumn

2 thoughts on “Look at the colour of it”