As I was reading your novel The Fire-Dwellers (1969), I had the feeling of having been caught in the middle of a conflagration, a large fire, difficult to get through. There is smoke everywhere, and the reality of the surroundings seems to have gone into flames. As much as your protagonist, we seem to be walking in circles. 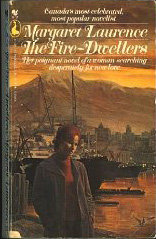 The novel revolves around Stacey MacAindra (born Cameron), the sister of Racheal Cameron from the book A Jest of God. Stacey has fled from Manawaka at the age of nineteen, and we meet her when she is a thirty-nine-year-old housewife living in Vancouver, married to the salesman Cliff MacAindra (Mac), and mother of four children.

Conditioned to believe that happiness for a woman consisted in getting married and having children, Stacey has achieved all that a woman of her time and place was supposed to yearn for: family and middle-class respectability. She thinks she should feel blessed for her station in life – instead, she feels assailed by a sense of guilt every time she is caught longing for something different, something of her own. She feels taken for granted and invisible.

Like an inflammable substance, her sense of guilt is fed by her intense fear of something she cannot yet put her fingers on, something all-pervading and unknown: Stacey fears for her children’s safety, she fears about her aging, she is discontent with her body and overwhelmed by her responsibilities as a housewife; she worries about money; she is troubled by the lack of communication with her husband, and fears that he might be having an affair; she may or may not have been raped by him in a regular basis; she is troubled by neighbours and magazine articles constantly telling her what she should do – “Are You Castrating Your Son?”; “Are You Emasculating Your Husband?”; she is troubled by the news of the Vietnam War, and by memories of WWII; she fears an impending nuclear catastrophe; and finally, Stacey is terrified with the prospect of wasting her life in a repetitive series of trivialities.

She is assailed by fear, fear, fear; she throws herself at things, tries not to think, tries to fill the void, to cross the fire; she takes night courses, she drinks a lot, she dances all by herself, she flees to the woods after a fight, she spends her time daydreaming; and then she is hit by guilt, guilt, guilt. And later fear, all over again. Like a fire, it spreads quickly, and it is hard to put out.

The highlight of your book for me is its multi-layered narrative, written in different intertwined discourses: the third person narration, written from Stacey’s perspective, is mixed with Stacey’s interior monologues, and shifts abruptly between dialogues with her family, flashbacks of her past, snaps of her dreams, as well as media headlines and television reports on the Vietnam War. This bricolage mirrors the protagonist’s own fragmented inner landscape, as well as draws a clear line between the acid tone of Stacey’s troubled thoughts and the passivity of her demeanour. She is split between the contrasting lives she leads from the inside and from the outside.

The headlines and television news play the role of a chorus throughout the novel, juxtaposed with the domestic scenes of everyday life. Rather than drawing a contrast between war and home, the juxtaposition only emphasizes the turmoil of the home front, like a projection on the outside of the protagonist’s inner fears. The war broadcasting, with its reports on fire and destruction, mirrors the fiery nature of Stacey’s own circumstances: she is also thrown into an ongoing battle with herself and her choices; her dreams have gone up in flames, and her mind is burning. She is constantly haunted by a nursery rhyme – “Ladybird, ladybird,/ Fly away home;/ Your house is on fire,/ Your children are gone” – that embodies her all-pervading sense of doom, fear and guilt. “Will the fires go on, inside and out?”, she asks herself. Stacey is the ultimate fire-dweller.

She alternates between spells of fear, guilt and loneliness. She cannot put her feelings into words. When she tries to reach for her husband and to explain to him that she feels “as though everything is receding”, Mac dismisses it with a quick remark about her need to see a doctor and get over with it. Stacey is caught in a circle of fire that seems to be closing in around her; she is stuck between her family’s needs, the society’s expectations about her, and her own longing for escape. Her interior monologue is her survival strategy, constantly going back and forth between past and present, reality and fantasy.

You captured very well the subtleties of motherhood and its ambivalence: “They nourish me and they devour me too,” Stacey thinks of her children. Yours is a book about loneliness: Stacey feels disconnected from her children and her husband; she feels disconnected about politics, war, and everything that is happening in the world at large; and, finally, she feels disconnected from herself and her own life. When the novel opens, we are looking at Stacey from a distance, as she is looking at herself – and her surroundings – through a full-length mirror, as if displayed on a television screen. For her, those everyday images seem “less real than real and yet more sharply focused because isolated and limited by a frame.” That’s the feeling we have throughout the book: Stacey is framed, zoomed in, caged. There is a sense of estrangement, as if we were as disconnected from her life as the protagonist herself. When the novel ends, we are taken to this same scene, in front of the mirror, as in an ever-repeating cycle.

And yet this is not so much a book about oppression; this is not another book about a middle-aged woman who is about to have a breakdown. Stacey’s voice is not a whining; it is fuelled by wrath, black humour and sarcasm. We are not face-to-face with a victim, but with a heavily injured survivor: a fire-dweller.

“Everything drifts. Everything is slowly swirling, philosophies tangled with the grocery lists, unreal-real anxieties like rose thorns waiting to tear the uncertain flesh, nonentities of thoughts floating like plankton, green and orange particles, seaweed — lots of that, dark purple and waving, sharks with fins like cutlasses, herself held underwater by her hair, snared around auburn-rusted anchor chains.” ― Margaret Laurence, The Fire-Dwellers

“God,I stand in relation to my life both as child and as parent, never quite finished with old battles, never able to arbitrate properly the new, able to look both ways, but whichever way I look, God, it looks pretty confusing to me.” ― Margaret Laurence, The Fire-Dwellers

“I can’t forget that piece in the paper. Young mother killed her two-month-old infant by smothering it. I wondered how that sort of thing could ever happen. But maybe it was only that the baby was crying, and she didn’t know what to do, and was maybe frantic about other things entirely, and suddenly she found she had stopped the noise. I cannot think this way. I must not.” ― Margaret Laurence, The Fire-Dwellers

“Okay so in some ways I’m mean as all out. I’m going to quit worrying about it. I used to think there would be a blinding flash of light someday, and then I would be wise and calm and would know how to cope with everything and my kids would rise up and call me blessed. Now I see that whatever I’m like, I’m pretty well stuck with it for life. Hell of revelation that turned out to be.” ― Margaret Laurence, The Fire-Dwellers

10 thoughts on “herself held underwater by her hair, snared around auburn-rusted anchor chains”