Yasunari Kawabata (川端 康成, 11 June 1899 – 16 April 1972) was a Japanese writer. Born in Osaka, into a well-established family, Yasunari was orphaned when he was four. Having lost his grandparents when he was fifteen, Kawabata moved into a boarding house near his high school. In 1917, he moved to Tokyo, and on the following year he entered the Humanities Faculty of the Tokyo Imperial University, as an English major. While still a university student, Kawabata re-established the Tokyo University literary magazine Shin-shichō (“New Tide of Thought”). There he published his first short story, “Shokonsai ikkei” (“A View from Yasukuni Festival”) in 1921. During university, he changed faculties to Japanese literature and wrote a thesis titled, “A short history of Japanese novels”. He graduated from university in 1924. 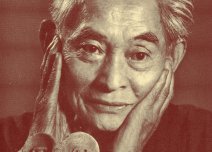 In 1924, Kawabata, Riichi Yokomitsu and other young writers started a new literary journal Bungei Jidai (“The Artistic Age”), as a reaction to the entrenched old school of Japanese literature, specifically the Japanese movement descended from Naturalism. It also stood in opposition to the “workers'” or proletarian literature movement of the Socialist/Communist schools. His was an “art for art’s sake” movement, influenced by European Cubism, Expressionism, Dada, and other modernist styles, and focused on offering “new impressions” or, more accurately, “new sensations” or “new perceptions” in the writing of literature.
In addition to fiction writing, Kawabata also worked as a reporter for the Mainichi Shimbun. Kawabata apparently committed suicide in 1972, by gassing himself. Some consider his death to have been accidental.

Kawabata was appointed an Officer of the Order of Arts and Letters of France in 1960, and awarded Japan’s Order of Culture the following year. He was awarded the Nobel Prize for Literature on 16 October 1968.