I first read your novel Beauty and Sadness (transl. by  Howard Hibbett) in 2010, and I remember I was not very impressed nor particularly touched by it at the time. I had to reread the book this month, for a Book Club discussion, and I must say I can now best appreciate the book for its strengths: which are not the plot nor the characters, but the writing’s subtlety and its rich descriptions.

I particularly enjoyed the intricate and tragic way multiple love triangles unfold, like intertwined streams, as the story progresses. Oki Toshio, a novelist in his fifties, reflects about his affair with Otoko Ueno, a painter who he had seduced and hurt when she was just sixteen years old. Despite not having seen her for more than twenty years, he longs to reconnect with her.

Oki has a wife and a son, who is now in his twenties, named Taichiro. Otoko, on the other hand, now in her late thirties,  is involved with a younger woman named Keiko, whom she takes as her apprentice. Seeking revenge and also out of jealousy, Keiko uses sex and beauty, in order to seduce both Oki and his son. On the other hand, Otoko, who had given birth to stillborn child from her forbidden love affair, harbors a stillborn love for Oki, a love both beautiful and sad.

The intricacy with which streams of affection are displayed in this book is its main strength: who loves who? Is Otoko’s infatuation with Keiko and her enduring love for Oki only a form of infatuation with herself? Who should be jealous of whom? Otoko of Oki? Oki of his son? Keiko of Otoko and Oki? Otoko of Oki’s wife? Or the other way around? Everyone is haunted by love, death, narcissism, masochism, desire and sex, in this novel. Each one of the characters harbors hurts, sorrows and doomed, unrequited love.

Like a river, your book starts in the middle of the story, when Oki is traveling to Kyoto, hoping to meet Otoko in the New Year’s Eve. The plot then goes on outwards, streaming in many directions, at the same time towards its beginning and  its conclusion. The beauty of Otoko and Oki’s tragic love story, heightened to the point of surpassing any moral questioning, lays in its unavoidable sadness – so unavoidable as a fixed river bed, perpetually flowing onwards, never changing routes nor coming back. 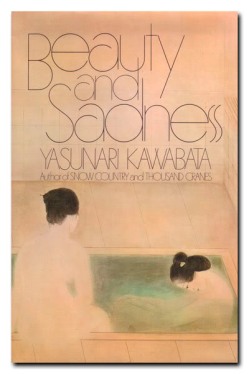 In your writing, it seems, silence is more revealing and eloquent than words. I also like the sensual way you draw on the use of imagery and colour, capturing landscape and light as means of illustrating the character’s feelings. Your prose feels like a painting whose images are drawn in a skillful arrangement of flow and stillness. We, as readers, are perpetually in this space in between: ambiguity pervades the novel and its tragic ending. The fact that we don’t witness the main facts, but are only told about them, makes their impact stronger. You are very skillful in what you choose to omit.

In your book, beauty both corrupts and is corrupted by itself; beauty is amoral and, at the same time, transcends morality; beauty is both found and lost in between the inevitable flow of time and the timelessness of a frozen moment. Your serene prose, even as the tension escalates, renders the character’s affections more unsettling, disturbingly beautiful. And sad.

“Time passed. But time flows in many streams. Like a river, an inner stream of time will flow rapidly at some places and sluggishly at others, or perhaps even stand hopelessly stagnant. Cosmic time is the same for everyone, but human time differs with each person. Time flows in the same way for all human beings; every human being flows through time in a different way.”
― Yasunari Kawabata, Beauty and Sadness

“Now that Otoko had heard about the night at Enoshima, that old love flared up ominously within her. Yet in those flames she could see a single white lotus blossom. Their love was a dreamlike flower that not even Keiko could stain.”
― Yasunari Kawabata, Beauty and Sadness

One thought on “But time flows in many streams,”