It breaks my heart to know that your debut novel, Why the Child is Cooking in the Polenta (Warum das Kind in der Polenta kocht), is a semi-autobiographical book. It is narrated by an unnamed girl, whose circus-performing family escapes from the dictatorship in Romania, in the 60’s, and travels through western Europe as illegal migrants. The book depicts the family’s everyday life through the point of view of the child. This artifice offers a poignant account of life as a refugee, exploring the blurry line between maternal care and child abuse and the intricacies of family relationships, as well as the complex entanglement between language, identity and nationality.

The child protagonist is haunted by her fear for the death of her mother, a circus performer (‘THE WOMAN WITH THE STEEL HAIR’) whose main act is to hang from her hair at dangerous heights. While her mother is working, the girl narrator is comforted by her older sister, who provides a distraction by telling scary stories about a child who is cooking in the polenta, a fairy tale so dark as the sisters’ life itself.

The family dreams of fame, fortune, and a big house, while journeying through circus camps, hotel rooms, and vaudeville stages. The girl narrator, the youngest of the troupe, is exploited by her mother and maybe abused by her father, who works as a clown and amateur filmmaker. The protagonist, still a minor, is left in a boarding school, then pushed into show business and later to prostitution. When the narrator and her sister are sent to a Swiss children’s home, where they struggle to learn German, they experience an acute sense of abandonment.

As the silent character she plays in her father’s home-style documentaries, whose only line is ever “Help!”, the narrator is constantly being silenced by the elder family members. Differently, though, she is never able to utter a cry for help. The girl is ignored or even punished when she tries to voice her ideas. She is also forbidden from having friends or even speaking to strangers, because anyone could inform against the family’s illegal condition, as well as steal their ideas for circus performances.

The silence is both imposed and self-imposed: one has the impression that, at times, the narrator doesn’t even know how to comunicate her feelings, since her wound seems to still be too fresh to be verbalized. The girl is caught between conflicting feelings: the blurry boundaries between being loved for being needed; and being needed for being loved. You  cast a sharp look on the line between maternal concern and child abuse: the narrator seems to be constantly walking this tightrope of love and hate, but remains unconvinced by either side.

The book’s title not only relates to the story the girl is told by her sister, but also encapsulates the girl’s inner conflict between loving her mother and recognizing the abuse to which she was subjected as a child: polenta (“mamaliga”) means “mother’s home cooking” in Romanian, right? At the same time as the girl yearns for her mother’s polenta (her mother’s love), she has to fight against it in order to survive. The same applies for her country of origin: the girl yearns for a homecoming, but is also aware that, in order to survive, she has to flee her homeland. The dilemma between staying and finding a new home mirrors the mother-daughter relationship in the novel: “I know my country only by smell. It smells like my mother’s cooking”. Similarly, the girl’s struggle against her father’s violence mirrors the risk of being sent back to Romania.

Throughout the book, the girl repeats the question: why is the child cooking in the polenta? As she grows up, her answers evolve from whimsical tales (“When the grandmother’s outside, the polenta says to the child: I’m so alone, wouldn’t you like to play with me? And the child climbs into the pot”), to violent screams (“THE CHILD IS COOKING IN THE POLENTA BECAUSE ITS MOTHER JABBED SCISSORS INTO ITS FACE”). 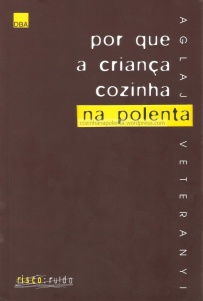 The writing style has also a fairy-tale quality: the child fights one horror by inventing another, by telling dark stories to herself. Her journey to the boarding school, for example, resembles the story of Hansel and Gretel: “[the narrator] wanted to pay attention to the way there so I’d be able to come back. But the harder I tried, the more everything looked alike, as though someone had smoothed out the landscape.” The stories she invents are so strange and distorted as her own life: nothing can be relied upon, and at the root of this feeling is the girl’s search for home and identity: “OUR STORY SOUNDS DIFFERENT EVERY TIME MY MOTHER TELLS IT.”

The experimental quality ofyour writing style is the book’s main strength. The many uses you make of language – as a medium and as theme – connect the various treads you are trying to explore. Form and content are inseparable in this novel. Illiterate but multilingual, the protagonist narrates her story in fragments that resemble scattered diary entries; she seems to be telling her story in silence, to herself, out of necessity. There is an immediacy in the child’s voice: sentences are short, full of gaps and shortcuts. A single detail can point out to a whole event that is never fully mentioned, only briefly alluded.

By relaying events in the present tense and in first-person narration, the writing is at once raw and lyrical, at times full of quirky insights. The prose reminded me of Herta Müller’s writing style, but punctuated by a somewhat dark sense of humour. The story is structured in fragments: almost blank pages, punctuated by a few all-caps sentences (“I DREAM THAT MY MOTHER DIES. SHE LEAVES ME A BOX WITH HER HEARTBEAT INSIDE.”) and lists of repeated words; one-sentence chapters are followed by longer passages in prose poetry, or by a few scattered lines that resemble poems in free verse.

The disjointed writing style emulates the role language plays in determining one’s identity. Because the girl’s father speaks a different native language from other family members, he is seen as a foreigner even in his own home. The family, while in exile, is marginalized by the natives because they cannot speak the official language. The girl feels alienated from her Romanian relatives, because of her inability to write in her native language, since she only was taught German at school. Silence is another way of preserving one’s identity, and of fighting fears and pain: “When you’re afraid, you take your heart into your mouth and smile, my mother says.”.

The fairy-tale quality of the writing is also a result of a core ambivalence: the narrative voice is that of a child, while the viewpoint is retrospective and belongs to an adult. There is a growing sense of despair in the child’s voice as she grows up. The style emulates both that of a woman who cannot yet verbalize her wounds, as well as that of an illiterate child who struggles to express herself in words she cannot quite grasp. The child open her wounds and puts them on display. These are fresh wounds, they are glistering, they cannot be talked about, only felt; and the book portrays a poignant quest for a fresh way to communicate pain; a subversion of language, in order to enact the feeling that lies beyond; and a journey of trying to find a home through language, a home in the page.

Wherever you are now, I hope you have found what you were searching for.

“In every new city I dig a hole in the ground in front of our trailer, stick my hand inside it, then my head, and listen to God breathing and chewing underground. Sometimes I want to dig all the way down to him—never mind the fear— and get bitten by him.”

—  Aglaja Veteranyi, Why the Child is Cooking in the Polenta

“I have to keep on thinking about my mother’s death so I won’t be surprised. I see her setting her hair on fire with the flaming torches and plunging to the ground while she’s burning. And then when I bend over her, her face crumbles to ash.

I don’t scream. I’ve thrown my mouth away.”

—  Aglaja Veteranyi, Why the Child is Cooking in the Polenta

3 thoughts on “I don’t scream. I’ve thrown my mouth away.”