In your novel Stoner (1965), we follow the trajectory of the eponymous character, a university professor who finds himself stuck in an unsuccessful marriage and in a career without great prospects. 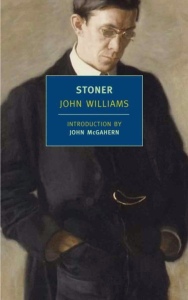 William Stoner, protagonist of the novel, was born in the late nineteenth century Missouri, into a family of poor peasants. He entered, by chance, at the University of Missouri in 1910 to study agronomy. As one of the graduation requirements, Stoner enrols in literature, and ends up falling in love with the subject in a class on Shakespeare’s sonnet 73 – a poem that already subtly foreshadows the character’s own future:

“(…)
In me thou seest the glowing of such fire,
That on the ashes of his youth doth lie,
As the death-bed whereon it must expire,
Consumed with that which it was nourished by.
This thou perceiv’st, which makes thy love more strong,
To love that well, which thou must leave ere long.”

When asked by the teacher about the meaning of this sonnet, Stoner, unable to respond, experiences the epiphany that will eventually determine his entire trajectory, both in his love life and at work: “The epiphany of knowing something through words that could not be put in words.” In a scene in which the protagonist apparently fails, by his inability, to answer that question (which had been sarcastically raised by his teacher), something fundamental happened in an invisible way inside Stoner: a revelation rooted in the act of understanding the very lack of understanding; and the passion aroused, from that moment, by this revelation.

In this seemingly simple scene, and through a dialogue with the aforementioned Shakespearean sonnet, you give the tone of the novel: the dissonance between life as perceived “from the outside” – waste, failure, loss, mediocrity, fire consumed – and life lived “on the inside” – the brightness of burning matter, the sudden revelation, the incommunicability, and the invisible courage necessary to pursue this revelation despite its incommunicability.

The whole trajectory of the protagonist can be read through this mirror of two simultaneous and interdependent sides: failure and conquest, appearance and essence, surface and depth. The character’s acts of apparent weakness, when pierced through by this strange mirror, will also be shaped like the reflection of a – difficult, inarticulate, not always evident – form of courage. “There are wars and defeats and victories of the human race that are not military and that are not recorded in the annals of history,” says Stoner’s professor and mentor, Archer Sloane.

Under the auspices of this professor, the protagonist leaves the agronomy course, graduates in Literature, defends its doctorate, begins to teach in the University of the Missouri, and there he remains until his death, in 1956. At the end of his life, Stoner emphasizes that academy had been “the only life that had not betrayed him”. Even this life, however, will betray him, though only on the surface: Stoner, a wholehearted professor, passionate about the discipline he teaches, soon becomes the victim of departmental struggles and persecutions which, under a layer of false civility, reveal themselves wild and ruthless.

A victim of invisible power games, Stoner is led to teach only introductory subjects, and is soon ignored by his peers. Here, a trajectory that can easily be interpreted as a professional failure is also pierced through by your strange mirror: we have, in fact, the “other side” here unveiled, the hidden side of integrity with which the protagonist treats his passion for academic life.

The novel begins with a short prologue in which the third-person narrator briefly describes to us, as in an obituary, the passing away of an assistant professor at a small university. The only evidence of the existence of this professor, the narrator adds, is a medieval manuscript donated to the library by his old co-workers on his behalf.

Already on the first page, we are exposed to the outcome of the plot and to the surface of the novel: the story of a failure. What will take the reader away, however, is hidden in the plot’s background: the ruthless description of what lies on the “other side” of this failure. From this brief introductory obituary, we follow chronologically the biography of Stoner, a trajectory that crosses two world wars, from the birth of the protagonist in the rural environment, to his life as a student, his marriage, the birth of his daughter, the work at the University and, finally, his death and the ultimate fading of his person and legacy.

If the beginning of the book presents us with the embers of a scene already completely consumed by fire, the novel will, in its course, illuminate a series of inarticulate epiphanies, whose flames will gradually consume the protagonist. The prose is austere, contained, and its brilliance is fragile and almost imperceptible: like something that suddenly lights up and soon goes out.

The restraint of your writing style reflects the character’s own restraint: Stoner never loses the resilient and timid stillness of the country man; his taciturn stoicism, born of the daily confrontation with adversity; his hardened but courageous way of accommodating himself to the whims of fate; and a kind of muting, born when one cannot even articulate what is happening in his own chest.

The discovery of literature by the young Stoner happens as a sort of conversion – the protagonist takes refuge in academic life as one who – with a certain inability to live on the outside, to live the “true worldly life”, the “life in the world” – locks himself in the cloister. Either inside or outside this refuge, however, what we have is a form of brutality very well disguised as civility.

It is impossible to read the book without realizing how superficial our concepts of success and heroism can be. Stoner’s life is punctuated by a series of small acts that demanded from him an invisible courage: by giving up life on the farm and pursuing his passion for the academy, by remaining intact in a corrupt environment, by losing a passion, Stoner is forced to confront his weaknesses and limitations as a son, teacher, husband, father, and lover. Resilient, the character never deviates, however, from the uncomfortable image of himself he repeatedly sees in front of him.

The book that falls silently from the hands of a dying character is the final image in which is drawn the depiction of a life that will fatally fall into oblivion: a relentless life without redemption, but made up of a series of small silent acts of devotion to literature. In this – not in fame or posterity – lies the unsuspected success of Stoner’s trajectory. “There was a softness around him, and a languor crept upon his limbs. A sense of his own identity came upon him with a sudden force, and he felt the power of it. He was himself, and he knew what he had been.”

“An occasional student who comes across the name may wonder idly who William Stoner was, but he seldom pursues his curiosity beyond a casual question. Stoner’s colleagues, who held him in no particular esteem when he was alive, speak of him rarely now; to the older ones, his name is a reminder of the end that awaits them all, and to the younger ones it is merely a sound which evokes no sense of the past and no identity with which they can associate themselves or their careers.”
– John Williams, Stoner

“In his extreme youth Stoner had thought of love as an absolute state of being to which, if one were lucky, one might find access; in his maturity he had decided it was the heaven of a false religion, toward which one ought to gaze with an amused disbelief, a gently familiar contempt, and an embarrassed nostalgia. Now in his middle age he began to know that it was neither a state of grace nor an illusion; he saw it as a human act of becoming, a condition that was invented and modified moment by moment and day by day, by the will and the intelligence and the heart.”
– John Williams, Stoner

Sonnet 73, mentioned in the book:

“That time of year thou mayst in me behold,/ When yellow leaves, or none, or few, do hang/ Upon those boughs which shake against the cold,/ Bare ruined choirs, where late the sweet birds sang./ In me thou seest the twilight of such day,/ As after sunset fadeth in the west,/ Which by and by black night doth take away,/ Death’s second self, that seals up all in rest./ In me thou seest the glowing of such fire,/ That on the ashes of his youth doth lie,/ As the death-bed whereon it must expire,/ Consumed with that which it was nourished by./ This thou perceiv’st, which makes thy love more strong,/ To love that well, which thou must leave ere long.”