Your novel Burnt Shadows (2009) is a mixture of family saga and political thriller, written in an elegiac tone. With the speed necessary to replace loss, the narrative carries along with its plot the fragments of many intertwined stories: the novel starts at the nuclear bombardment in Nagasaki, in the rattles of World War II; then it jumps to Old Delhi during the decline of British colonial rule in India and its independence process in August 1947; further on, the story strolls through the Pakistani city of Karachi and the mujahideen resistance to the Soviet occupation of Afghanistan in the 80’s; and it finally ends up at Guantanamo Bay, after the bombing in New York in 2001. 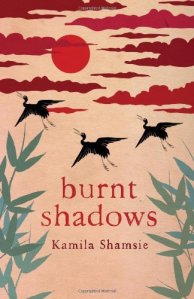 Against the backdrop of some of the most notable international mishaps in recent history, you focus on a small flap of invisible lives that intersect, at random, in the shadow of this tumultuous context. Hiroko Tanaka is a Japanese teacher and translator who lives in Nagasaki during World War II and falls in love with the German immigrant Konrad Weiss. The story begins, however, with a great loss: after the nuclear bombing of Nagasaki, Konrad passes away. All that’s left of him is his burnt shadow, set on a stone – a silhouette of melted body fat that had stained a stone lost in the streets of the ravaged city. As a reflection of the confusion experienced by Hiroko, shortly after the bombardment, we readers also experience the discovery of Konrad’s death as a fragment of a scene – an attempt at haiku, a blurred memory, an interrupted thought:

“There. See? There.”
“How can you be sure it’s him?”
“No one else in Nagasaki could draw such a long shadow.” – Burnt Shadows, Kamila Shamsie

Hiroko survives, though also marked: her back is covered by the burn scars left by the bomb. At the time of the bombing, our protagonist wore a kimono printed with birds on its back. She will carry this mark on her body for the rest of her life: the burned shadow of these kimono birds, the imprint of the moment when skin and silk became a single surface.

Konrad’s death is only the first of the shocks and losses that punctuate the plot. You painstakingly build the scene of each of the various worlds through which the narrative unfolds – and suddenly, with one breath and without compassion, you destroy each of these worlds, one after the other. The title of the final part of the book, “The Speed Necessary to Replace Loss,” refers to Michael Ondaatje’s The English Patient – and is a good indication of how the stories are linked in Burnt Shadows.

Tired of being stigmatized in her home country as a “victim of nuclear bombing,” Hiroko travels to Delhi to meet Ilse Weiss, Konrad’s half-sister. Ilse had married the Englishman James Burton, and in order to deny her German identity, she adopted the name Elizabeth Burton. The couple have a son, Henry, who is studying in a boarding school in England. In Delhi, Hiroko falls in love with one of Burton’s officials, the Muslim Sajjad Ashraf, who is assigned to teach the Urdu language to the Japanese polyglot.

From that point on, the story will be shattered and reassembled many times, and this will happen more and more quickly. The characters will be drawn to Pakistan, Afghanistan and the United States, and their lives will collide with Afghan refugees, young guerrillas, CIA agents, illegal immigrants and mercenary armies. Your writing style here is arid: you hold steady the reins of this drama, and modulate intensities through the use of minimal elements, quick maneuvers and sharp images.

Despite its epic scope, the novel stands out more forcefully at the points where it focuses on intimate, almost microscopic aspects: dialogues, ways of looking, suppositions, and small pains. The third-person narrative alternately adopts the perspectives of different characters, often in the same scene – as if we were looking at this scene through a shattered mirror, whose fragments are not only scattered at different angles, but also continuously change places. From these pieces, you sew – now with humor, now with empathy, and always without compromise – a tangle of betrayals, illusions, wasted opportunities, and misunderstandings.

At the heart of your novel, we have the conflict between two communicating vessels: the individual and collective identities. Each historical event at once opens and sews a break in the scene inhabited by the characters; it destroys and rebuilds not only social structures but also affections and sorrows. Instead of tragedies and victims, you write about shared stories and their survivors. The strength of your novel is drawn from very small, almost invisible elements – everything that is not written in the history books and does not appear in the newspapers: shadows on stones, marks on bodies, birds trapped in cloth, people entangled in contingencies, all the cages we carry along with us.

“Sitting on the divan, she touched a finger to the bullet wound in his chest. It seemed so small, so incapable of creating the exodus of blood which had drenched his clothes and skin as he lay in the hospital, waiting for her to claim him. Death has been instantaneous, they said, as if there were a relief in that. She did not want death to have been instantaneous; she wanted to have at least held his hand as he lay dying and said goodbye to him in terms other than the, ‘Why are you doing again? You’ll find nothing. Stay. Oh all right, go,’ that had been her farewell to him that morning. Stay. Stay. Stay. She should have repeated it like a madwoman, banged her head against the wall in a frenzy, hit him and wept. She should have said it just one more time, just a little more forcefully. She should have taken his dear, sweet head in her hands and kissed his eyes and forehead. Stay.”
― Kamila Shamsie, Burnt Shadows