I’ve just read your book The Lost Honor of Katharina Blum (transl. Leila vennewitz), and I believe it is better understood when we remember the context in which it was written. In 1971, West Germany was witnessing the height of the paranoid over the Baader-Meinhof group, and the state reacted by increasing its repression of the left: measures ranged from the 1972 “anti-radical decrees”, banning people with “questionable politics” from teaching and other public-sector jobs, to false accusations of innocent people and the attribution of other non-related events to the terrorist group. When a bank was robbed and a guard killed, and the nation’s largest newspaper blamed the group for the crimes, you, in an article for Der Spiegel, criticized the newspapers for their irrational coverage of the events. Because of this, you became the target of threatening letters and anonymous calls. Between the years of 1972 and 1977, your telephone was tapped and your apartment was searched several times. As a reaction to the treatment you received for your intervention in the Baader-Meinhof case, you wrote The Lost Honor of Katharina Blum, where you tried to shed light on the themes of political repression and violence.

The novel centers around the ways in which institutionalized violence leads to moral destruction. Narrated in journalistic prose, the story begins by describing Katharina Blum’s murder of Werner Tötges, a reporter for the mass-circulation tabloid News (Zeitung). Then it goes on to account for that murder, by exploring the four days between Katharina’s meeting with Ludwig Götten, a suspected terrorist, and Tötges’ murder. The narrator identifies the sources of his report as the following: transcripts of police interrogations; the testimonies of Hubert Blorna, an attorney, and Peter Hach, the public prosecutor; and stories published in the News.

At a carnival party at the home of her friend Else Woltersheim, Katharina, a 27-year-old housemaid, meets Ludwig, a man who has been under police surveillance for robbery and is said to be a terrorist. After dancing and falling in love with Ludwig, she takes him to her appartment, where they spend the night. The next morning, the heavily armed police burst in her apartment to arrest Götten, who had already parted. Unable to find him there, the police detain Katharina for harboring a wanted man.

After being interrogated, Katharina is immediately branded by the press as a terrorist. In what resembles an insidious witch hunt, her apartment is ransacked, she’s handled roughly and her personal life is ravaged and publicly exposed in degrading tones. The reporter from the tabloid spies on her, distorts personal statements and provides lurid accounts of her sexual life. Instead of pursuing investigative journalism, Tötges stresses the sensationalist aspects of Katharina as a “terrorist’s” lover, and mold her life for his own purposes. The quiet, apolitical and even prude Katharina is depicted as a “communist heartless whore”, and she gradually becomes the target of public outrage. Katharina and her friends are held hostage by the media’s manipulation of truth and unscrupulous journalism: her privacy is invaded, and everyone in her past is exposed to the public’s curiosity. Once cleared of all the previous charges, Katharina then seeks revenge on the cynical reporter who had defamed her.

In a thinly disguised satirical voice with a journalistic flavour, and with the help of an omnipresent narrator who is a counterpoint to the sensationalism of the headlines, you depict the brutal treatment of a woman by the police and the media, in order to dissect the theme of an innocent person getting caught up in a net of state’s violence and press distortions, as well as the conflict of the individual threatened by faceless bureaucratic institutions. Katharina Blum resembles a social-realist Josef K (as in Kafka’s The Trial). Katharina’s identity is gradually crushed by police and media coercion until she is driven to madness and murder, as a means to illustrate the ways in which individual violence can be a reaction to state repression.

By manipulating information in order to spread fear against anyone whose views differ from the norm, the press is transmuted into an instrument of oppression. You wrote about a case of power and language abuse, in which the limitless freedom granted to press, when promoted in perverted forms, reveals itself to be a subtle and institutionalized form of brutality.

A 1975 film adaptation of Böll’s novel was directed by Volker Schlondorff and Margarethe von Trotta. In the beginning of Heinrich Böll’s book, and at the end of Schlöndorff’s film, the following text appears:

“The characters and action in this story are purely fictitious. Should the description of certain journalistic practices result in a resemblance to the practices of Bild-Zeitung, such resemblance is neither intentional, nor fortuitous, but unavoidable.” 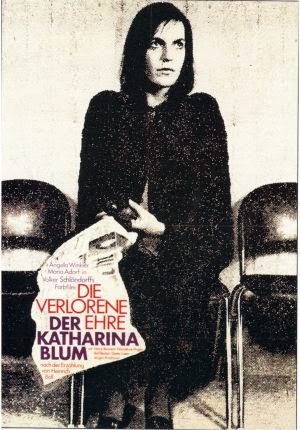 One thought on “Words as pistols”