In Nightwood (1936), you cast the lost ones, the renegades, the tortured souls, the outcasts. All those who cling to life by a thread, with their last muscle: the heart. Your nightwood presents us with its share of destroyed lives; it is a space whose borders – class, religion and sexuality – prove to be porous and interchangeable. Your novel spans through the fading  glamour of the 1920s Paris, and inhabits the decadent shadows of Berlin and Vienna. Like an experienced gardener, you cultivate your nightwood; you weave in it, with your stylistically bold writing style, a dark romance, interrupted by the crack of the last muscle at the exact moment when it breaks. 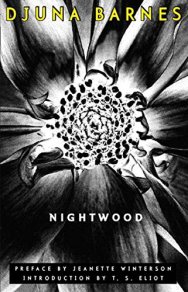 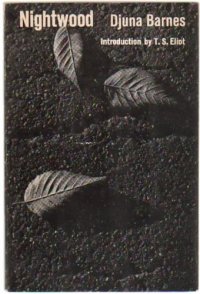 Your novel is the musical score of this symphony of broken, exposed hearts – hearts written on the page; hearts shared hand in hand among eviscerated characters, among creatures of the shadow. Felix, Guido, Robin, Nora, Jenny, Matthew, the prostitutes, the drug addicts, the lovers: everything they touch turns into night. The light does not become them any longer.

In the nightwood, we find Guido Volkbein, the Wandering Jew, and his son, Felix, a “self-proclaimed” Baron who represents the decomposing Belle Époque. Felix is a hollow chalice, which you gradually fill with life, sorrow and a kind of hard sweetness. Robin Vote, an American expat married to Felix, engages in a cruel love ritual with Nora Flood and Jenny Petherbridge. Described by one of the characters as “La Somnambule”, Robin wanders alone at night, like an exterminating angel, and seeks redemption in the arms of anonymous people. Nora Flood, one of her lovers, is the character around whom lost souls gravitate: souls who yearn to be listened to, redeemed, and made human. Even when Nora is quiet, she is capable of a painful fury that covers everything, like a white carpet, heavy with silence: “I have been loved,” she says, “by something strange, and it has forgotten me.”

Robin, on the other hand, is the child-woman who destroys the hearts of all who dare to love her. Her face was like something once beautiful found in a river. Nora and Jenny are the voluntary victims of her abuse. Robin’s passivity, Jenny’s predatory nature, and Nora’s passionate devotion make for a violent and impossible love triangle, populated by daily aggressions and self-mutilation. Meanwhile, we are also presented to Dr. Matthew O’Connor, a transvestite and unlicensed gynecologist who punctuates the plot with biting digressions, overflowing with fury and piercing insights, as if his words were needle and thread of the heavy cloth of your novel (it is impossible not to remember Molly Bloom’s monologue in Ulysses – albeit distorted).

All characters, creatures of darkness, are exiled from themselves and from each other. As in a personal diaspora, the narrative also alternates between Vienna, Berlin and the underworld of Paris. The action takes place essentially through dialogues, in which the characters reveal themselves to each other. As they touch each other, move closer or go away, our perspective is also touched and changed. Your hypnotic and nuanced writing flows like a bad, bad dream.

There is a truth in your characters’ damaged hearts – hearts which are delivered to us in pieces, dirty with drink, drugs and love. In your nightwood, all characters are estranged from themselves, marked by the need to play a role, and exposed to the reader by a writing style that has the quality of a narcotic: the focus of your writing is not the depiction of facts or information, but of meanings. Felix, Guido, Robin, Nora, Jenny, Matthew are tricks of light, but of a dangerous light able to open our skin, and touch inside on our private nightwoods, our hardest, most difficult place.

The narrative folds upon itself until it becomes unrecognizable as narrative: a paper flower, all crumpled, whose petals we slowly draw off (He loves, He loves me not – in a broken and unstable rhythm). There is no consolation in the nightwood. There is a wild intensity, there is imprudence and pain. In the nightwood, there is sex, hatred, obsession, and perhaps love: a frail inner light, sometimes shared, but soon forever lost in the darkness.

“Night people do not bury their dead, but on the neck of you, their beloved and waking, sling the creature, husked of its gestures. And where you go, it goes, the two of you, your living and her dead, that will not die; to daylight, to life, to grief, until both are carrion.” ― Djuna Barnes, Nightwood

“Our bones only ache while the flesh is on them. Stretch it thin as the temple flesh of an ailing woman and still it serves to ache the bone and to move the bone about; and in like manner the night is a skin pulled over the head of day that the day may be in a torment. We will find no comfort until the night melts away; until the fury of the night rots out its fire.” ― Djuna Barnes, Nightwood

“My war brought me many things; let yours bring you as much. Life is not to be told, call it as loud as you like, it will not tell itself. No one will be much or little except in someone else’s mind, so be careful of the minds you get into, and remember Lady Macbeth, who had her mind in her hand. We can’t all be as safe as that.” ― Djuna Barnes, Nightwood

“The unendurable is the beginning of the curve of joy.” ― Djuna Barnes, Nightwood

“We are adhering to life now with our last muscle–the heart.” ― Djuna Barnes, Nightwood

“I have been loved,” she said, “by something strange, and it has forgotten me.” ― Djuna Barnes, Nightwood