Your novel Purple Hibiscus (2003) won me over from the beginning – and the reason for this  lies heavily on your narrator’s tender but unremitting voice. Kamibili Achike is a shy 15-year-old girl, member of a wealthy family in Nigeria. Your novel begins and ends with her voice, like an incantation. 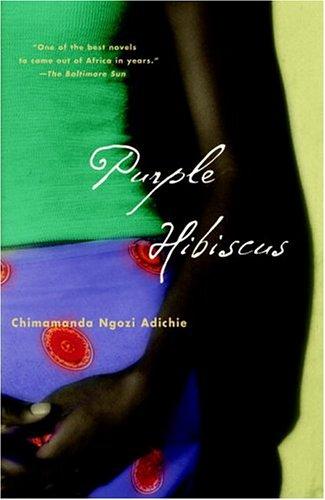 “Things started to fall apart when my brother, Jaja, did not go to communion and Papa flung his heavy missal across the room and broke the figurines on the étagère.” The novel begins with this sentence, uttered in the Kamibli’s breathy voice, at the very moment when, still reluctant, the girl begins to give voice to the drama of her family. And she does so precisely when things start to fall apart, when a painful storyline meets its end.

“Things fall apart” is a direct allusion to the title of one of the most popular novels by the Nigerian writer Chinua Achebe, addressing the decline of an Igbo clan’s leader, under the shadow of British colonialism and of missionary Christianism. You have many times  openly declared to have been influenced by Achebe: “Because of writers like Chinua Achebe and Camara Laye … I realized that people like me, girls with skin the color of chocolate, whose kinky hair could not form ponytails, could also exist in literature.” (The danger of a single story, TEDTalk, 2009).

As Achebe’s work, Purple Hibiscus is also a novel about an Igbo family suffocated by the violence of patriarchy, as well as by the British cultural domination and the strict religious moralism. Papa (Eugene), the patriarch, is a Christian fanatic educated in England. He brings together in himself and mirrors back all of these three strands of violence.

Papa, as well as Nigeria, is a complex character, a tangle of broken wires. The tyrannical power he exerts over the family (Beatrice, Kamibili’s mother, and Jaja, her brother) is suffocating. Eugene is a man publicly revered for his professional success and wealth (Papa owns several food manufacturing companies), for his religious commitment (he is a devout Catholic), for his courage in the defense of democracy and human rights (he owns a newspaper that discloses the excesses of the dictatorship in the country), as well as for his generosity to the communities of which he is a member (the village, the church, even the families of his company workers). On the other hand, in the private sphere, inside his own family, Papa is cruel, overbearing, and imperious: he physically abuses his wife and his children, he imposes strict rules on them, he despises his own pagan father.

However, it is not possible to reduce Eugene to a single story, as well as it is not possible to reduce Purple Hibiscus to a protest against British imperialism or against political instability and economic difficulties in Nigeria. These issues do pervade the book, and are themselves intermingled in the Papa’s character – but they too soon fall apart, and flow into Kambili’s personal drama. She is a girl in conflict with herself, struck by the discovery (and dangers) of her personal blossoming as an adolescent: like a road not yet paved, filled with mishaps; and as painful a process as the blossoming of a nation after the intense cultural repression during colonialism.

Kambili had always followed the path strictly outlined by the father: his rules, prohibitions, violence. It was a path with no doors or windows, but its route was known and given beforehand. Choices were unnecessary because they were prohibited. But then things started to fall apart: suddenly, with the disintegration of her family, ends the power wielded by her father, and the girl begins to see before her a vast landscape of new possibilities. Suddenly, Kambili does not know which rules to follow. She is at a loss, so she has to invent her own rules: the blossoming happens to Kambili interwoven with the pain of everything that was over for good. The ambiguity of the girl’s feelings can not be reduced to a single story: pain and relief are forever entangled for her.

Eugene can not be reduced to one of his many facets, and Kambili, though silent, is torn between the devotional love she feels for her father and her urgency to question his values. Kambili slowly learns how to call her Papa’s rules into question, but many of her objections are silenced by fear, routine, and even affection. As well as Papa’s power over the family, also Kambili’s love and, in a sense, the moral and religious idolatry that she felt for him, everything begins to fall apart. “Papa sat down at the table and poured his tea from the china tea set with pink flowers on the edges. I waited for him to ask Jaja and me to take a sip, as he always did. A love sip, he called it, because you shared the little things you loved with the people you love.”

When sharing his tea with his children, Eugene also shared a daily and unsuspected dose of poison. This is a subtle and beautiful metaphor: the poison reveals itself as such only in the end, when  things start to collapse, when Kamibili begins to question – even if only in her hearts, in an internal and silent conflict with her love for her father – everything that Papa had once represented: his beliefs, rules, his violent, damaged, bruised form of affection. Even at this point, there is no single answer to Kamibili’s internal conflict: her questions remain open, love and pain continue to be intertwined, and one’s life wires are left loose without redemption nor forgiveness. But a purple hibiscus blossoms, silent and unsuspected.

Kambili sounds almost as a war correspondent, as she narrates the drama of her family. Her personal flowering oscillates between two female figures: Mama (Beatrice), the submissive wife, frightened by constant beatings, who, in secret, eventually ends up by poisoning her husband; aunt Ifeoma, Eugene’s sister, a courageous, determined and intelligent woman, a single mother who works as a university professor and struggles against economic difficulties and growing political repression.

The contrast between her aunt’s house – where everyone can (and should!) express their own opinions  -and her own family – where the rules are strict – opens a breach into the until then unrestricted belief Kambili had in her father’s values. This gap will never be sewn together again, as well as it will never be a complete laceration. With this small breach begins however the family’s collapse: one world ends and the girl does not know what the world to come will be like. The new rules are not put, she will probably need to recreate them. We are transported into this moment when the girl’s life is suspended: the moment of the painful freedom of everything that has not arrived yet, and of everything that it is on its way – much like the eternal future in which post-colonial nations find themselves trapped.

Throughout the week during which Kamibili lives in her aunt’s house, she is removed from the suffocating cocoon of her family, and then exposed to a bewildering variety of life choices, ambitions and attitudes. Her sense of home, her sense of belonging, simply collapses. The contrast between the way her life was perceived by the world (her socially recognized father, his well-behaved children, her exemplary mother, their affluent life) and her real life indoors (a violent and tyrannical father, his imprisoned children, her submissive mother) unfolds as another untold story.

Purple Hibiscus is a book of single stories that clash with each other. As such, your novel can be read in different ways. It’s a tender story, silently told, and in first person; the story of a girl trying to find her own voice after years of physical and psychological abuse and imprisonment. It’s a love story, about a strange kind of love, mixed with violence. It is a story of victims and executioners, both sometimes interchangeable. And it is also a story of resilience in the face of oppression (domestic as well as political).

Silence, filled its subtexts and lines in between, is an important character in Purple Hibiscus. Kambili, Jaja and Mama talk to each other quietly, internally, sometimes only with their eyes. Silence is their means of survival – and it is also a narrative strategy, adopted both by you as author as well as by your narrator. Kambili is trying to find her voice, and is also trying to give voice to her personal history. There is also the government, trying to silence journalists and teachers. Silence is a form of punishment and resistance – adopted, for example, by Jaja, against his tyrannical father. Silence is a form of violence and liberation. Silence is finally an artifice you adopt, in order to create a distance between the reader’s reaction (horror and shock in the face of atrocities narrated by the girl), and Kambili’s own passivity.

Shy and repressed, Kambili is faced with the challenge – and ultimately the desire – to create her own voice, after the collapse of her small and painful world. Allegorically, the development of Nigeria is drawn in parallel to the girl’s maturation. Kambili begins as the narrator in the story, and, at the end, ends up becoming the whole story. Silence is no longer the product of domination, intransigence  and imprisonment. When it becomes too suffocating, silence turns into the very breathing space where Kambili can gradually weave for herself something closer to freedom. As the girl herself does, silence also undergoes a kind of metamorphosis.

By stealing from Kambili her first smile, Father Amadi kicks off the girl’s personal path toward her voice, which culminates when she courageously expressed her love for him. Kambili metamorphoses into purple hibiscus, a rare flower variety, artificially produced by one of Ifoema’s friends. This rare flower, when taken home by Jaja, symbolizes something new, unexpectedly entering the family’s life. It is also a creation – as well as the voice Kambili has to learn how to create anew.

“I lay in bed after Mama left and let my mind rake through the past, through the years when Jaja and Mama and I spoke more with our spirits than with our lips. Until Nsukka. Nsukka started it all; Aunty Ifeoma’s little garden next to the verandah of her flat in Nsukka began to lift the silence. Jaja’s defiance seemed to me now like Aunty Ifeoma’s experimental purple hibiscus: rare, fragrant with undertones of freedom, a different kind of freedom from the one the crowds waving green leaves chanted at Government Square after the coup. A freedom to be, to do. But my memories did not start at Nsukka. They started before, when all the hibiscuses in our front yard were a startling red.”

Your book begins and ends in silence – but the latter is a timid silence of hope. If, on Achebe’s novel, the Igbo clan begins to fall apart, in your book the opposite happens, even if it does in a still precarious way: here, domination and imprisonment are the things that fall apart. A girl wins over her voice, and also regains a new silence to breath into. The voice of a nation gradually ceases to be stolen, trapped into single stories. Untold stories are given new words, new subtexts, new silencing gaps. A rare flower is blossoming just now – albeit fragile and strange and precarious – in the garden.